Todd Sampson is regularly seen on the hit ABC show the Gruen Planet and is a regular host on the Channel 10 news show The Project and more recently hosted a ground breaking documentary series Redesign My Brain, which won the 2013 AACTAs for the Best Documentary of the Year. 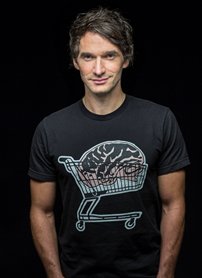 I have been to a lot of conferences and heard a lot of speakers but that was the most inspirational and honest speech I have ever heard.
Macquarie Bank Global Investments 2010

He was fantastic! Everyone loved him and followed him out of the hall, buzzing with questions. He was so friendly, down to earth and engaging. He was not only inspirational but funny and approachable, and a leader through practice. He stayed on for a long time
just chatting. We couldn’t have been happier.
Golden Key International Conference 2010

The guys were all raving about it and are all talking about how to make some tangible changes as a result of Todd's message and how we turn ideas into executable outcomes. He also hit the nail on the head with two key points, 1) difference between art and creativity and 2) problem identification in addition to his main message of fear stifling creativity. Yes.... lots to think about. He's also a great guy...you can see why he is so well regarded.
Billabong 2009

Since 2005, we have been running a bi-annual speaker event with some of the top speakers in Australia and Todd's feedback from the students is the most positive so far. Todd is an engaging and well-prepared speaker who builds instant and effective rapport with his audience. Not only was he a fantastic speaker but he was also a friendly and relaxed guest. We could not have been more pleased with Todd as a keynote speaker. His ability to blend captivating stories, humour and honest advice about leadership, creativity and life challenges was refreshing and really spoke to our audience. I would recommend Todd as a speaker to anyone. Many, many thanks!
Macquarie University

Todd was excellent, such a lovely guy. His message was very powerful and he really validates it by his own example in his personal and work life. It was really great of him to stick around after the event and speak to the queue of people who patiently waited for his attention. He is a very warm and compassionate person, and his intelligence and sense of humour was evident throughout his presentation.
Hume Council
Todd Sampson travels from NSW
Fee Range: $15001 to $20000

Todd Sampson is the Chairman of Leo Burnett, one of Australia’s top creative advertising agencies and is one of the few CEOs in advertising to come from a strategy background - having spent 10 years as Head of Strategy - during that time he has helped lead some of the most successful and creative agencies in the world.

He is also the breakout star of the smash hit ABC show the Gruen Planet and is a regular host on the Channel 10 news show The Project. He’s also hosted a ground breaking documentary series on the brain called Redesign My Brain, which won the 2013 AACTAs for the Best Documentary of the Year.

An entrepreneur and technology strategist, with more than a dozen years experience in the online sector Todd joined Leo Burnett Sydney in 2002. He is also one of the most awarded strategists behind some of Australia’s highest profile work.

In 2008 as the co-creator of the Earth Hour initiative Todd Sampson won the coveted Titanium Lion at Cannes and B&T's Creative Campaign of the Year in Australia. Amongst his other awards he has also been ranked as the most influential advertising executive in Australia by the Financial Review, the most influential men under 45 by Men’s Style, and was nominated for GQ Man of the Year. Todd Sampson is highly regarded and available to share his creative genius with your organisation – a creative, innovative marketing and business strategy speaker or presenter with fresh and inspiring insight.

Todd Sampson is the writer, host and human guinea pig of the award-winning Discovery Science Series called REDESIGN MY BRAIN.  The premise of the series was simple.  For over 70 years, science has told us that our brains are fixed.  You are born with the brain you have, it develops rapidly until age 7 and then it starts a steady decline from age 30 until you die.  There was nothing you could do about it.  But science has now proven that to be false.  In fact, modern science has now shown that our brain is plastic and that we ALL have the ability to improve it at any age and at any time.  This presentation will show you how to boost your Brain Power.

Todd will not only take you behind the scenes of this extraordinary scientific journey, he will also provide you with the practical tools, strategies and techniques to improve your brain.  We are all capable of more than we realise … and modern science is showing us how.