One of the ABC's most experienced radio and television current affairs journalists Tony Jones is one of Australia's most respected journalists. As host of Q&A he bought over 25 years of award winning journalism to the table.  Tony left Q&A in late 2019 after 12 years where he was known for his incisive and probing interviews on the breaking issues of the day. 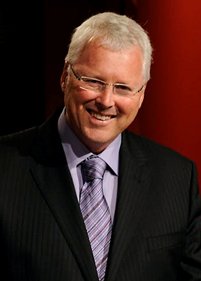 “Excellent, Tony did a great job for AEMEE again this year.  The Board were very impressed at the level of preparedness given the short notice he ended up having.  He engaged the panel and delegates extremely well. He research the topic and spoke to us before arriving to ensure he was on the right track.  It was very thorough.  Excellent in fact. This panel session was the "opener" for the conference and clearly it set the scene for the two days.”

"Tony was incredibly professional, from his preliminary briefing interview right through to the Q& A Panel Discussion on the day of the Conference. Whilst he is a celebrity in his own right, he made you feel at ease straight away. You will not be disappointed if you book him !"

Tony did an excellent job as MC and panel moderator for our conference. He kept the day flowing, engaged the speakers with interesting questions and kept the audience involved.

In addition, he was professional and friendly which made it a pleasure working with him in the lead up to the day.

“Excellent, Tony Jones was very professional. His insight and input into the content for our event was invaluable, and his interaction with the guest panellists made all the difference. His knowledge and research of the topic of discussion was excellent.”

One of the ABC's most experienced radio and television current affairs journalists Tony Jones is one of Australia's most respected journalists. As host of Q&A he bought over 25 years of award winning journalism to the table.

Tony left Q&A in late 2019 after 12 years where he was known for his incisive and probing interviews on the breaking issues of the day. His role on Q&A capitalises on his ability to tap into the political zeitgeist and keep the discussion focused and on track.

Tony Jones has won pretty much every award an Australian journalist could wish for. He's covered the seminal news events of the last two decades - from the fall of communism in Eastern Europe, through the collapse of apartheid in South Africa, to the rise of the Taliban and, closer to home, the revelations of sexual abuse in remote Aboriginal communities.

During Tony Jones' career he has been was host of ABC's Lateline and has reported for Four Corners on ABC as well as Dateline on SBS.

During his three years with Four Corners, he won a Walkley award for Horses for Courses on the Waterhouse racing dynasty as well as a Penguin Award for My City of Sydney examining the city's development boom. Frozen Asset his story on the exploitation of Antarctica won a Gold Medal in the New York Film and Television Festival and was also an International Emmy Award finalist.

Jones also won a Walkley Award (with Kerry O'Brien and Dugald Maudsley) for Lateline's coverage of the end of Gorbachev's Soviet Union.

In 1990, Tony was the ABC TV current affairs correspondent covering the collapse of communism in Eastern Europe, the re-unification of Germany, the Gulf War, the war in the Former Yugoslavia, the fall of Kabul in Afghanistan to the Mujahadin and the collapse of apartheid in South Africa.

Tony returned to Sydney in 1993 as Executive Producer of Foreign Correspondent.

From 1994-96 Jones was the ABC's Washington correspondent providing stories for both News & Current Affairs including coverage of the US Congressional and presidential elections.

He returned to Foreign Correspondent in 1997 as a reporter and covered war crimes in Bosnia and the search for peace, which won him a Silver Award in the New York Film and Television Festival. In mid 1998 Tony returned to Four Corners where he reported the rise of One Nation and profiled the Prime Minister John Howard prior to the 1998 Federal Election before becoming host of Lateline. In 2008, Tony was appointed as host of ABC's Q&A, a program aimed at putting the Australian public directly in touch with the politicians and playmakers - giving them the opportunity to get some answers, eye to eye.