Tony Squires is a much loved sporting and media personality.  Radio and television presenter and published author, Tony has a wealth of knowledge and experience when presenting at conferences, MC'ing events and Quiz Games. 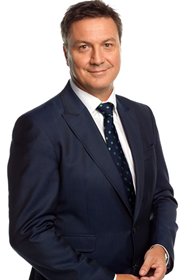 From the moment you took that stage my nerves settled. I could see that you had done your homework on ARA (not even I read the Retail Trader Magazine) and had customised your content. For me your performance was always going to be the Linchpin for the evening and this certainly proved to be true. Many people commented on the high energy, up beat feel of the awards dinner and that it was a fun night. This can only be attributed to you, Tony, as you delivered a slick awards presentation peppered with your very tailored awards jokes. Many people phoned and emailed and your performance as MC is on top of their list of compliments.

Tony was absolutely brilliant as the MC for the kick-off and made a huge difference to the success of the event. He spent a great deal of time and effort getting to know all the presenters, so when he interviewed them on stage it was as if he knew them all personally. He was extremely entertaining, funny and amusing, and probably the best MC I've seen.

Tony Squires was extremely down to earth and professional. With more than the normal amount of last minute changes, he was still cool calm and collected and never without a smile. The quality of his speaking and quick wit was appreciated by all present and I believe Tony went above and beyond what was required of him. Will definitely be using Tony again in the future and recommending him to colleagues and peers alike.

Tony Squires has been one of Australia’s most popular media personalities and a highly successful corporate entertainer and speaker for more years than he cares to admit. Tony’s media experience, which includes hosting major live television shows, extensive radio broadcasting and accomplished newspaper columnist, provides potential clients with a range of unique and entertaining options. He has a wealth of experience in corporate entertaining roles such as master of ceremonies and speaker.

Tony hosts the weekly sports panel show Back Page Live on Fox Sports.  He is also heard on Triple M, heading up a range of weekly shows.

A tragic supporter of the St George Illawarra Dragons, Tony is also an ambassador for the Sydney Swans and delivers a comic Week in Sport spot in the Chairman’s Club at home games for the Swans’ highest-valued corporate guests.

Originally from Newcastle, Tony has worked on stage, music, radio and television with a number of his Novocastrian mates, including Robins, Steve “the Sandman” Abbott and John Doyle, aka “Roy Slaven”.

Tony’s television career began when he was a regular judge of the short films in the ABC’s popular Race Around The World.  From there, he created Inside the Arena for Foxtel, a live-to-air television show talking about television. Basically, Tony never needed to get off the couch…

Tony moved from the reclining leather chair of Inside the Arena to the desk to host the much loved sports panel show The Fat on ABC TV. Concerned more with the theatre of sport than the groin strain injuries, it was a huge hit before the Seven Network swooped. The Fat became 110% Tony Squires on Seven, which also gave Tony the opportunity to host the network’s Athens Olympic coverage and the One Day Cricket series in England with Stuart MacGill and Kerry O’Keeffe, amongst other major events.

Tony has been a journalist for more than 25 years, with much of that time spent at the Sydney Morning Herald as a feature writer, columnist and section editor. He edited the Guide for a number of years, as well as being editor of the sports section. He wrote a popular weekly television column before getting his own head on the box.  In 2009, Tony published his second book, Cracking the Footy Codes. It’s an entertaining cheat sheet for those wanting to understand games that bemuse.