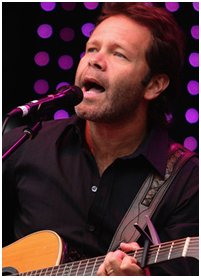 Troy Cassar-Daly is one of Australian country music’s favourite sons, and has been one of Australia’s most high profile country musicians since bursting onto the stage in 1994. He has been a regular at the Tamworth Country Music Festival (where he first performed at the age of eleven), The Deadlys and international performer in Nashville, Tennessee.
Troy Cassar-Daly released his first EP, "Dream Out Loud", and was nominated for his first Golden Guitar for Best Male Vocalist in 1994. He has won many awards during his career including the 2000 CMAA Awards for Best Male Vocal and Song Of The Year for 'They Don't Make 'Em Like That Anymore' as well as winning almost a decade's worth of Deadly Awards. He has also won 3 ARIA Music Awards for Best Country Album in 1995, 2006 and 2009 respectively.
Troy’s first single 'Dream Out Loud' was released in 1994 by Sony Music and reached No.1 on the Australian country music charts. The album was released in January 1995 and Troy won the 1995 Aria Award for Best Country Record. At the 1996 Country Music Awards, in Tamworth, Troy won "Best Male Vocalist". He also made a cameo appearance in the motion picture Race the Sun in which he performed a song in a bar scene.
In June that year Troy was part of the Australian Country Music Showcase in Nashville. The Showcase included Lee Kernaghan, Gina Jeffreys and Tommy Emmanuel. As a result Troy returned to the States to record his new album True Believer with Steve Dorff.
Troy Cassar-Daley partnered up with Kate Ritchie for the singing competition It Takes Two aired on Seven Network in 2006. Troy has also featured in a Wiggles music video for the song Old Dan Tucker.
Troy, along with Kasey Chambers and Shane Nicholson, played together at the Melbourne Cricket Ground on 14 March 2009 for Sound Relief which was a proposed multi-venue rock music concert in support of relief for the Victorian Bushfire Crisis.
Troy Cassar-Daly is married to country singer and radio DJ Laurel Edwards with whom he has two children, Clay and Gem.
Subscribe
© 2022 Platinum Speakers