Print
If it’s a conference or Awards emcee you’re looking for to rely on for professionalism and to adapt to any occasion then it’s Verity James who you should be looking for. Verity James has been a broadcaster with the ABC for 25 years both in Canberra for 10 years and in WA and she has presented all manner of radio shows from current affairs to lifestyle to specialist language, political and music shows. 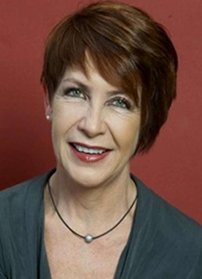 "From the comments we received, everyone thoroughly enjoyed Verity's contribution as MC, especially the humour she brought to the occasion. It is always pleasing to have laughter at what can sometimes be a very serious AGM. Great MC."

"Better than excellent, because just 'excellent' doesn't do Verity justice. She was the consummate professional and helped make the event a great success. She was a delight to work with and added tremendous value to the occasion through her professional, yet relaxed and friendly manner with the audience."

"As always Verity was fantastic as MC for Engineering Leadership Conference 2008 – the audience raved about her."

Verity James travels from WA
Fee Range: Up to $5000

Verity was one of Perth’s leading television and radio presenters for over 25 years.

Verity commenced her career as a TV news presenter for ABC Canberra and fulfilled this role for ten years before moving to Perth.

Once in Perth Verity joined ABC Radio and quickly became the host of her own daily afternoon program on ABC 720 which she presented for eight years.  She also hosted numerous other TV and radio productions for the ABC.

Verity also has a strong interest in cooking and food preparation and spent three years as restaurant reviewer for The West Australian, and was a contributor to Western Australia’s only specialist food publication - Spice Magazine. As part of her role as restaurant reviewer for The West Australian she travelled to numerous interstate food festivals and also reviewed restaurants in Sydney and Melbourne.  She also ran her own fresh produce business specialising in W.A. products for five years.   Verity has also hosted numerous celebrity chef evenings with leading chefs such as Gabriel Gate and Kylie Kwong.

Verity was also a panelist on ‘Can We Help’ a national ABC TV show which aired at 6.30p.m. on Friday evenings during 2007, and was also the inaugural Ambassador for Australian Red Cross and sits on the board of various Western Australian charities.