Virginia Haussegger AM is a passionate women’s advocate and communication specialist. She is also an award-winning television journalist, writer and commentator, whose extensive media career spans more than 25 years.   A sought after Speaker and Facilitator, Virginia regularly addresses corporate and government forums on women, power and leadership. 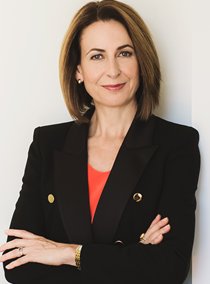 Testimonials for Virginia Haussegger AM

“Just to summarise in a few words: Virginia was amazing! She had so many brilliant ideas how we actually could achieve our objectives better in doing things differently, was super engaged and has made herself familiar with the complex topic we were discussing very quickly and really achieved to motivate, challenge and lead the 1.5 days full of discussion, workshops etc. We couldn’t have achieved such a great outcome of the forum without Virginia.”

Virginia Haussegger AM travels from ACT
Fee Range: Up to $5000

Virginia Haussegger AM is a passionate women’s advocate and communication specialist. She is also an award-winning television journalist, writer and commentator, whose extensive media career spans more than 25 years.

A graduate of Melbourne University, Virginia began her journalism career as an ABC TV News cadet in 1986. A skilled interviewer, she went on to become the youngest woman to host the ABC’s flagship current affairs program the 7.30 Report, and has worked as a reporter and presenter of that program in four capital cities.

In the early 90s Virginia moved to commercial TV reporting for A Current Affair on Channel 9, and later Network 7’s Witness, as Senior Reporter. In 2001, after working in the corporate sector as a communications specialist with Cosway Australia, Virginia returned to broadcasting as news anchor in Canberra where she was the face of ABC TV News in the national capital until late 2016.

Virginia is widely published across Australian print media, previously as a weekly columnist in The Canberra Times, and contributor to The Age and Sydney Morning Herald.

Virginia’s seminal article on feminism and childlessness was ranked by The Age newspaper as among the most significant opinion pieces published in its 150 year history. Her book Wonder Woman: The myth of ‘having it all’ was launched in a live broadcast at the National Press Club in 2005.

In 2009 Virginia made a self-funded trip to Afghanistan to highlight the plight of women and children. And in 2011 she curated the exhibition “Eye On Afghanistan”, to raise funds for the Australian based NGO Mahboba’s Promise. She later featured in the multi-award winning documentary, ‘Love Marriage in Kabul’ by Amin Palangi.

Virginia is the recipient of various awards including, the United Nations Association Media Peace Prize for coverage of Indigenous Affairs: Penguin Award for Current Affairs Excellence; and Toastmasters Communicator of the Year ACT (2007).

In late 2016 Virginia was appointed to head a new gender equality initiative, the 50/50 by 2030 Foundation, at the University of Canberra’s Institute for Governance and Policy Analysis (IGPA), where she is an Adjunct Professor. With a singular focus on improving the representation of women in leadership and key decision making roles across all levels of government and public administration, the Foundation is the first of its kind in Australia.

A sought after Speaker and Facilitator, Virginia regularly addresses corporate and government forums on women, power and leadership. In 2014 Virginia was made a Member of the Order of Australia (AM) for service to the community, as an advocate for women's rights and gender equity, and to the media.

Virginia has served on a number of boards and committees including; UN Women National Committee Australia; the Snowy Hydro SouthCare Trust, and the Australia Forum Steering Committee. She currently sits on the Board of the ACT Government’s Cultural Facilities Corporation; Women in Media Canberra; and is Patron of the Canberra Rape Crisis Centre.

Wonder Woman: The myth of ‘having it all’