Print
Two-time Walkley Award winner, Virginia Trioli is one of Australia's best-known journalists, with a formidable reputation as a television anchor, radio presenter, writer and commentator. She is much sought-after speaker, master of ceremonies and facilitator, combining a rigorous interviewing style with an often wicked sense of humor. 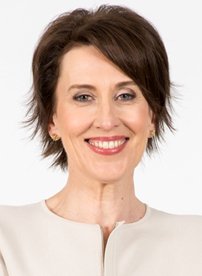 Virginia was extremely professional and delightful to work with. Having such a trusted and experienced figure presenting the Marathon really lifted the event and was a key part of its success.

Virginia is always a consummate professional.  She is an excellent facilitator who manages participants and audiences well,  allowing people to share their views without letting them go off on tangents.  She is highly engaging and entertaining.

Virginia is a warm, entertaining and knowledgeable host who quickly builds rapport with her audience.

Virginia was a wonderful facilitator and held the panel discussion with great insights, knowledge and key questions to the speakers. She managed the hypothetical with respect but also great humour. We were very pleased with Virginia and would love to work with her again.

Virginia was the consummate professional. She ran a tight ship, kept us ahead of time, was on point, funny and appropriate in every respect. Her interaction with us - the Institute team - was relaxed, personable and cooperative. She was a joy to work with and we’re more than happy. Please pass on our regards and deepest thanks.

An outstanding MC and facilitator who helped drive conversation and discussion over the two day forum.

Two-time Walkley Award winner, Virginia Trioli is one of Australia's best-known journalists, with a formidable reputation as a television anchor, radio presenter, writer and commentator. She is much sought-after speaker, master of ceremonies and facilitator, combining a rigorous interviewing style with an often wicked sense of humor.

Clients such as the Garvan Institute, Fairfax, News Ltd, GHD, the Museum of Contemporary Art in Sydney, the Royal Australian Institute of Architects and Opera Australia regularly call on her services.

Virginia, is an honours graduate in Fine Arts from the University of Melbourne and La Trobe University, and published 'Generation F',  her celebrated response to Helen Garner's 'First Stone'.

She won the Australian journalism's highest honour, the Walkley Award for her business reporting and Virginia won a second Walkley for her landmark interview with the former Defence Minister, Peter Reith, over the notorious Children Overboard issue. She won the Melbourne Press Club's Best Columnist award, The Quill.  She won Broadcaster of the Year at the ABC Local Radio Awards.

Virginia has held senior positions at the Age newspaper and the Bulletin magazine For eight years she hosted the Drive Program on 774 ABC Melbourne, and the Morning Program on 702 ABC Sydney. She has been the host of ABC TV's premiere news and current affairs program, Lateline, and a presenter on ABC TV's Sunday Arts. She currently anchors ABC News Breakfast on ABC 1 and ABC News 2. She is a frequent lecturer and public speaker, Virginia Trioli is a highly respected and accomplished conference facilitator and master of ceremonies
Subscribe
© 2022 Platinum Speakers