In 2016 Waleed Aly won the Silver Logie Award for Best Presenter and Gold Logie Award for the Most Popular Australian TV Personality. Waleed is a broadcaster, author, academic, musician and one of Australia’s most respected and versatile media talents. He is co-host of network TEN’s The Project, live to air weeknights. 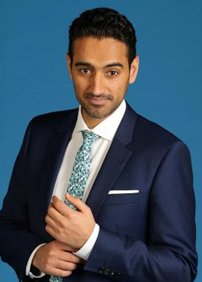 Waleed Aly is a broadcaster, author, academic, musician and one of Australia’s most respected and versatile media talents. He is co-host of network TEN’s The Project, live to air weeknights.

He has tackled comedy as both a writer and presenter for SBS’s Salam Cafe along with hard-hitting news as a host of ABC radio’s Mornings program in Melbourne. He has done sporting analysis on ABC News 24’s The Drum, and political analysis on Q&A and BBC World. Through this as well as regular appearances on Meet The Press, The 7.30 Report, Enough Rope with Andrew Denton and Offsiders, Waleed has become widely recognised and trusted by audiences across Australia.

Waleed’s writing regularly appears in The Guardian, The Monthly, The Australian, The Sunday Times of India, The Australian Financial Review, The Sydney Morning Herald and The Age. He is the author of What’s Right? The Future of Conservatism in Australia (Quarterly Essay 37). His debut book, People Like Us: How arrogance is dividing Islam and the West (Picador, 2007), was shortlisted for several awards including the Queensland Premier’s Literary Awards and for Best Newcomer at the 2008 Australian Book Industry Awards. In 2014 he was awarded the prestigious Walkley Award for Commentary, Analysis, Opinion and Critique.

Waleed is the guitarist and main songwriter for Melbourne originals band Robot Child. He played the lead guitar in the world’s first ever theatrical production of Pink Floyd’s classic album, The Wall with Nuworks Theatre in Melbourne.

Waleed was Radio National’s Drive show host from 2012 for three years, co-hosting The Project on Friday nights during this period. Currently he presents The Minefield on Radio National with ethicist Scott Stephens every Thursday morning

Waleed is a lecturer in politics at Monash University, working in their Global Terrorism Research Centre