Print
Wally Lewis AM "The King" has been rated by many commentators as one of the most brilliant players and captains of Rugby League ever. Tough and uncompromising on the field, he is famous for a brilliant career that included the Best Player in the World Award and election to the Sport Australia Hall of Fame. 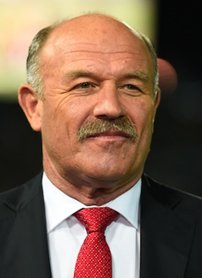 Testimonials for Wally Lewis AM

As our MC for the evening. Wally was professional and polished. His linking and stories were humorous and he had a unique style of incorporating what was said by others in way of speeches into his routine.

Excellent. Wally was very professional and extremely talented. He added a new and popular dimension to our trade show stand and we look forward to working with him again.

Excellent. Wally was extremely personable in the lead up to the function and was the ultimate professional during his performance.

Wally was fantastic! A true legend, he was gracious, kind and warm to all our guests. He spoke so well during his address and was personable and happy to talk afterwards, shaking hands and posing for photographs with near on all 450 attendees! We were honoured to have King Wally be part of our event.

Behind the Mask Masquerade Ball

The audience loved him. He combined humour with the serious message about safety, following the rules and looking after your mates

Everyone loved him! He had the audience engaged from the beginning

Wally Lewis AM has been rated by many commentators as one of the most brilliant players and captains of Rugby League ever. Tough and uncompromising on the field, he is famous for a brilliant career that included the Best Player in the World Award and election to the Sport Australia Hall of Fame.

Commitment to the task is a hallmark of the Wally Lewis approach. As Wally himself said, "Football has been one long continuous challenge...success is a combination of hard work, dedication, plus a little luck."

As a motivational speaker, Wally Lewis has the stature and the story to hold an audience spellbound. A household name, he is a true leader and an inspiring speaker. Professional and personable, humorous and hard-working, Lewis is always a crowd favourite.

From the moment Lewis stepped out alongside Rugby League legends in State of Origin No: 1 back in 1980, a new era in Queensland self-esteem was born. The great man went on to become a legend virtually overnight, and earned such celebrated nicknames as "The King", "The Emperor of Lang Park" and even the most exalted - "The High Priest of the Spectacular."

Although the re-birth of Queensland Rugby League supremacy came with the ingenious introduction of State of Origin football, the feats of Lewis were no doubt the catalyst. Until he retired from the Origin arena at the end of the 1990 series, the King had missed only two matches - both through injury.  He captained the Maroons from 1981 to 1991, and won 19 of the 31 matches in which he played, and from 1992 till 1994 he was the Queensland Origin team coach.

As a player Lewis, totally dominated the scene and chants of "Wally, Wally" at Lang Park on State of Origin night became legendary.  Since his retirement a bronze statue has been erected in his honour at Lang Park, and the Queensland player of the series now wins the Wally Lewis Medal.

On the International scene, his dominance was just as monumental. In 1986 Wally Lewis became only the second Queenslander to captain a Kangaroo Touring side to Great Britain and France, and only an injury in 1990 robbed him of breaking a string of records in the game. Lewis played in 34 tests for his country between 1981 and 1991. He captained Australia 23 times, and in 1986 became only the second captain to lead the Kangaroos on an undefeated Ashes Tour.

At the 2002 Dally M Awards, Wally was one of six players inducted into the inaugural members of the Australian Rugby League Hall of Fame. Lewis, who for 12 years tormented NSW State of Origin teams and wore an unofficial crown as King of Queensland, took his place alongside others dubbed "immortals" of the game, such as Clive Churchill Reg Gasnier, Johnny Raper, Bobby Fulton and Graeme Langlands.

Since retiring, Wally Lewis has been a News/Sports presenter with the Nine Network (QLD), and a sports anchor at prime time with the 6 O'clock Nine News. He has been a regular Rugby League announcer with Fox and a panel member on FOX Sports NRL Rugby League Show.

Wally Lewis' biography, Out of the Shadows, was published in 2009. Out of the Shadows is Wally′s startlingly candid account of his life since his retirement from rugby league - from the darkest days of depression and debilitating seizures to his hard-fought recovery and triumphant return to the nation′s TV screens.