Wayne Schwass is one of the most highly rated performers in the AFL history, playing 282 AFL games over 14 years with the North Melbourne Football Club (1988-1997) and the Sydney Swans (1998-2002). Founder of The Sunrise Foundation, Wayne is a versatile, motivating and inspirational speaker. 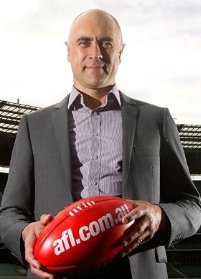 We were delighted to have Wayne as our keynote speaker for our Annual Luncheon and Staff Wellbeing event this year in June. Wayne’s 14 year struggle with mental health was brought to light with a positive energy and engaging presentation that was well received by all attendees. Wayne’s vibrant personality and humour made him easy to be around and stress-free to work with.

I cannot speak highly enough of Wayne and his presentation at our TaylorMade adidas Golf Sales conference earlier this month. When booking a sports person to speak at our Sales conference, ultimately I was looking for someone who would not only motivate our team but relate the presentation to the sales processes themselves. Wayne did exactly that. Any preconception that a sports person may only speak mainly of his sporting achievements was quickly alleviated. Wayne spoke minimally of his sporting background only to mention that sport gave him the disciplines to put in place to help shape his sales success.

Wayne’s preparation was exemplary. Wayne contacted myself a fortnight before the event and was very thorough in understanding our business, the current challenges we have, the market place and the objections that our sales staff face. Wayne spent an hour on the phone with me developing his understanding of our business and how he could relate his sales knowledge to ours. Wayne followed up again a week later with an email asking further questions and a provided a bio for me to share with the team.

On the day Wayne related and interacted well with our sales staff from start to finish.  Wayne had the sales teams buy-in by asking questions providing some real life examples and experiences. His references to planning, goal setting, moving a customer away from a negative to create a positive and the value of relationship building for sales success reinforced our company’s principles. The sales team left our conference with commitment and motivation.

I would like to thank Wayne for all his help and professionalism on the day and I would have no hesitation in having Wayne speak again to our group or recommending him to any business wanting a ‘sales motivational’ guest speaker.

The speakers were outstanding, especially Wayne. He really provided a great insight into depression as a whole and his personal battle, but also a clear outline on how someone could go about obtaining help. This may have had a huge impact personally on men in the audience but additionally a greater reach for men and audience members to talk to friends and family who may be of need of some help.

Overall Wayne pitched his communication perfectly at the audience and was highly motivating.

On behalf of the partners of the Men’s Health Forum and personally could you please pass on our great thanks for a wonderful informed presence on the evening.

Wayne Schwass is one of the most highly rated performers in the AFL history, playing 282 AFL games over 14 years with the North Melbourne Football Club (1988-1997) and the Sydney Swans (1998-2002). Founder of The Sunrise Foundation, Wayne is a versatile, motivating and inspirational speaker.

Born in New Zealand, Schwass moved to Warrnambool in Victoria at the age of 3 where he began playing Australian Rules before being recruited by VFL club, Kangaroos.

Wayne has since forged a name for himself as a highly respected AFL Broadcaster on TV, radio and online with AFL.com, AFL Live, Triple M Footy and AFL Central- hosting such shows as Off The Bench TV, Footy Feast and calling AF on the AFL Live. The 2016 season will see Wayne return to the commentary team at Triple M and talking all things footy with PRIME7’s Off The Bench TV.

Wayne is also the Founder of ‘The Sunrise Foundation’, an organisation he created after becoming one of the first AFL footballers to openly speak out about his battle with depression. Though no longer operating, the Sunrise Foundation was created to develop and deliver purpose built preventative education programs addressing depression for young people aged between 12-24 with a particular focus in the education system, athletes from all sports across all levels including the elite and rural Australia

Wayne’s vast experience from being an AFL player to media personality, from the private sector to establishing the Sunrise Foundation has also developed him into a versatile and motivating Keynote Speaker and MC.

Wayne’s keynote includes a candid, honest and inspiring story about his 14 year struggle with depression and his road to recovery, including;

Depression is an illness that doesn’t discriminate

How depression invaded every aspect and area of his life and the impact this had on his health, well-being, performance, enjoyment and quality of life

Watching the colour fade from his life, living in a heavy fog and accepting his disease had taken control of his mind

How he managed to hide his illness from his family, friends, team mates, football club and the general public for 14 years and the impact this had on his quality of life

How he managed to play 282 AFL Games, win 3 Best & Fairest Awards, play in a Premiership side, win All Australian Selection, represent his State and be awarded AFL & North Melbourne Football Club Life Membership all while battling clinical depression

Why he considered an option with irreversible consequences to escape the pain and suffering, why and how he chose to keep fighting

Why he self-medicated for 14 years

Why he believes the Stigma associated with mental illness is out-dated, uneducated and totally unacceptable in 2014

How he lived in denial until his light bulb moment

The importance of your own emotional health and wellbeing

Understanding, education, acceptance and learning to like/ love yourself again

Why it’s a shared responsibility

Overcoming the fear of being rejected

Difference between a job and a career

Owning your career, performance and ultimate success or failure

Go looking for feedback, positive, negative and constructive and why this is important

Why products, product knowledge, expertise and experience aren’t the most important assets to selling

What’s your value proposition – why should people buy from me

Identifying, investigating and understanding opportunities before you even meet the customer and pitch

How to become a trusted advisor