Full of energy, laughter and comedic brilliance, Wil Anderson is a much loved and recognised performer and MC.  Wil is
also a television host, writer and podcaster. 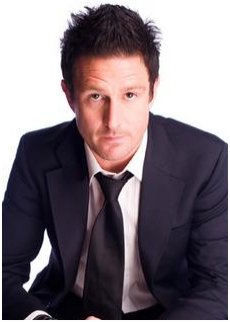 “Like Adam Hills on speed, Australian comedian Wil Anderson’s new show is brilliant… an hour in his company flies by all too quickly”

“What a funny Aussie. Wil Anderson’s fast-paced routine is bursting with laughs and energy…there is enough material here to fill two hours making the one he has sprint by…a higher laugh-per-minute rate than anyone I have seen before… ‘Ando’ is a comic gem”

“If you ever have the chance, go and see Wil Anderson live. I could have sat there all night if laughing so hard didn’t hurt so much...”

“Anderson has a sharp brain, quick tongue and is up

there with the best of them”

“Anderson is, without doubt, one of the nation’s finest comedic talents”

“Anderson is among the funniest comedians we have...”

“Anderson is the eternal naughty boy you can’t help liking”

“Wound up tighter than a spring and barely pausing for breath during his one-hour set, Wil Anderson is manic, likeable, passionate…”

“A comic juggernaut of current affairs.”

Wil is a stand up first and foremost, touring Australia and the world at every opportunity, performing more than a hundred shows a year. His stand up is a densely written, high-speed ride through one of the most wonderful comedic imaginations in the world. Politics, pop and the banal come together in a Wil Anderson routine, always delivered with more conviction and enthusiasm than any man’s vocal chords can take.

Over the last 6 years Wil spent a lot of time north of the equator, performing live in London, Edinburgh, Ireland, Montreal and Los Angeles and securing regular guest appearances on the popular US late night comedy talk show, Chelsea Lately.

Since 2008 Wil has hosted ABC TV's highest rating program The Gruen Transfer series- a role that saw him nominated for a Gold Logie in 2010, and spawned spin offs, Gruen Nation, Gruen Sweat and Gruen Planet. In 2013, Gruen Nation did a 4 week special, looking in depth into the Australian Election Campaign.  After a year off in 2014, Gruen will be making a much anticipated return to our screens in the second half of 2015.

In addition to his Gruen commitments in 2012 Wil was busy touring his hit live show Wilarious that sold out venues around Australia, earning rave reviews and winning his third consecutive Bulmer's People’s Choice Award at the Melbourne Comedy Festival. Not to mention being named one of comedy’s hottest acts by none other than John Cleese, proving that this world class comedian is definitely at the top of his game.

For the majority of the last two years, Wil has returned his focus purely to stand up, touring Australia nationally with his solo shows, as well as digging his teeth into the club scene in the US and Canada. Wil has performed in cities all over the North American continent, Portland, Denver, San Franscisco and Alaska to name a few. He also added a season at London’s SOHO theatre to his list.

In 2013, his live show GoodWil, debuting at the Adelaide Fringe Festival and then occupied the prestigious Princess Theatre during the Melbourne International Comedy Festival. His national tour sold out around the country.

2013 also saw Wil invited to perform at the prestigious Just for Laughs Festival in Montreal, performing alongside some of the world’s best comedians. In conjunction, he hosted a television special for Channel 7, Wil Does Montreal, giving us a behind the scenes look of the festival and some of its performers.

In conjunction with his live work, Wil has discovered another love – podcasting. His very popular TOFOP Podcast, which he hosts with friend Charlie Clausen, has one of the highest download rates for a comedy podcast. The podcast is so successful, they have been invited to attend and participate in the invite only LA Podcast Festival. Wil has also started up a second podcast Wilosophy – where he gets interesting guests on the show to talk about their philosophy on life. Guests have included Adam Spencer, Dr Karl, Judith Lucy and Todd Sampson.

2014 was a big year for Wil. He started off by doing the thing he loves best, live shows in and around the US.  He returned to Australia for yet another sell out festival season, with a brand new live show, Wiluminati. This show also toured nationally and finished with two sold out shows in the Concert Hall of the Sydney Opera House.

Wil was also invited back to JFL Montreal, where he not only appeared in a variety of galas, but also performed Wiluminati to yet another sell out crowd and received a standing ovation at the conclusion.