Print
In a few short years Adam Brand has become one of the most awarded, highest selling artists and biggest draw cards in Australian Country Music. He is country music's favourite son and 'Built For Speed' has the depth and strength to... 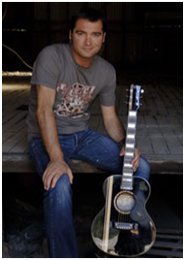 In a few short years Adam Brand has become one of the most awarded, highest selling artists and biggest draw cards in Australian Country Music. He is country music's favourite son and 'Built For Speed' has the depth and strength to keep him on his full throttle, fuel injected journey to wherever he sets his sights.
Both of Adam Brand’s previous albums are nearing platinum and his preceding effort "Good Friends" was voted album of the year at the 2001 CMAA Awards. In fact since the release of his self–titled debut album in July 1998, Brand has received 7 CMAA Golden Guitar Awards, 2 Mo Awards and notched up 7 #1 singles. Now, ten years, eight Golden Guitars, three platinum albums, two gold albums and two gold live DVD’s later, Brand releases what is perhaps the most defining work of his career.
‘Blame It On Eve’ was recorded between Sydney and Nashville with long time producer Graham Thompson and many of the musicians that played on his previous album ‘What A Life’. It covers expansive ground from the hard driving country rock of ‘Get On Down The Road’ and ‘Down Home’ to the desolate “Waiting On Sunshine’ and the fragile ‘Not So Strong’ which features a vocal performance that is arguably Adam’s finest to date.
So how do you follow that? If the answer is an ever growing talent, great songs, a hot studio band and a top production team then Adam Brand has outdone himself and this, his third album is clearly his best to date.
As the title suggests, "Built For Speed" contains the odd song about cars. Any Adam Brand fan would have been expecting it. There are also other familiar themes freshly explored here – family, friends, new love and enduring love, but on 'Built For Speed' Adam explores new ground and steps outside his boundaries. After a gentle nudge he's even willing to agree that his latest work demonstrates a maturity that may not have been as obvious on his two previous albums.
Subscribe
© 2022 Platinum Speakers