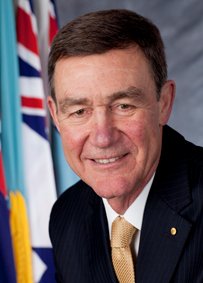 It is a rare privilege that we are able to enjoy the honour of having such a notable and highly regarded dignitary as you. Your frank and pertinent after dinner presentation was the highlight of the event.

The commitment you demonstrated to the event and to legacy, despite a number of other high profile commitments, is greatly appreciated and went a long way to ensuring that the legacy Remembrance Lunch was the most successful to date. Tremendous feedback from those in attendance has been received, many of whom stated that they valued your time, enjoyed and gained great insight from your address.

Although he retired as Chief of the Australian Defence Force in July 2011 after 41 years of service in the military, Air Chief Marshal Sir Angus Houston AK, AFC (Ret'd) continues to be much in demand by governments for his skills as a problem solver. In fact successive governments have relied heavily on his wisdom, judgment, leadership and character and this shows no sign of abating.

On Australia Day 2015, Angus became Sir Angus when he was named as a Knight of the Order of Australia, the nation's highest honour. He received the award for extraordinary and pre-eminent achievement and merit in service to Australia, through distinguished service in the Australian Defence Force, continued commitment to serve the nation in leadership roles, particularly the national responses to the MH370 and MH17 disasters, and in a variety of roles in the community.

Angus was the Chief of the Defence Force from 4 July 2005 until 4 July 2011. Prior to that role he was Chief of Air Force for four years. Angus was Chair of the Anzac Centenary Advisory Board from July 2011 until March 2014. The Board provided strategic advice to the Government on the national program for the Anzac Centenary 2014-2018. In 2012, Angus led the Expert Panel on Asylum Seekers.

Angus is also Chair of Airservices Australia, the Council for the Order of Australia, the Defence South Australia Advisory Board and the Canberra Symphony Orchestra. He is a Board Member of the Lowy Institute for International Policy, the Australian Cancer Research Foundation, the Anzac Centenary Public Fund Board and GreaterGood Canberra. In addition, he is patron of numerous charitable organisations.

Sir Angus draws on his long military career and particularly his experiences as head of the ADF to provide interesting anecdotes to support his presentations. He particularly enjoys the outcomes that have been achieved by working with people in teams - and in recent times leading those teams to achieve what needs to be achieved.

Sir Angus Houston is widely respected within the ADF, by all sides of politics, by his fellow Australians and also by the international community, where he has been a formidable advocate for Australia's interests.

Sir Angus can tailor his presentations to highlight any conference themes, if required. His presentation topics include leadership in general, leading in difficult times, business resilience, crisis management and specifically the 2014 Ukraine air crash incident and the search for the missing Malaysian Airlines plane.