2013 Young Australian of the Year and keynote speaker Akram Azimi was born in war-torn Afghanistan. With no choice, and only their clothes on their backs, Akram and his family fled, leaving everything behind.   A powerful keynote speaker, Akram Azini’s personal story of success is compelling, and filled with important messages about resilience, hope and discipline. 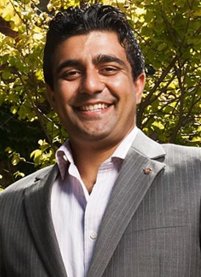 A gifted public speaker, well prepared for the topic of the event and audience, while telling his own story. Audience came away being inspired, more informed and also challenged.

Akram really connected with our students – especially our boys.  His personal story and gentle manner and approach really spoke to them, and whilst it may take time and maturity for some of them to understand the full meaning of Akram’s message, he has certainly left them with many things to think about, and influenced their way of thinking.  One boy stated in his head boy application that he was inspired to apply for the position because of Akram’s courage and fortitude to step out of his comfort zone in a new country, and to alter the choices he was making.

Great to deal with and genuinely cared about serving our audience well.

Akram Azimi travels from WA
Fee Range: Up to $5000

2013 Young Australian of the Year and keynote speaker Akram Azimi was born in war-torn Afghanistan. With no choice, and only their clothes on their backs, Akram and his family fled, leaving everything behind.

Fortunately, Akram’s family won something of a global lottery: they received a visa to Australia in 1999. With the help of his amazing high school teachers, Akram overcame his disadvantaged background and became his school’s top academic student. Soon after, he was elected head boy.

Akram went on to university where he studied law (hons), science and sociology (hons) before committing to completing his PhD.

A powerful keynote speaker, Akram Azini’s personal story of success is compelling, and filled with important messages about resilience, hope and discipline.

Overall, he has formally taught for 2000+ hours and mentored young people pro bono for 3000+ hours.

In 2013 Akram Azimi was named Young Australian of the Year in recognition of his community service and mentoring work.

Akram is Co-founder and director of I Am the Other (reconciliation). For more than seven years and has been a mentor of True Blue Dreaming, a rural and remote educational program.

As an End of Polio ambassador, Rotarian and grassroots advocate, Akram contributed to the government’s funding commitment of $80 million for polio eradication in 2013, and another $20 million in 2014.

Akram has published articles in Australian newspapers and policy magazines, covering a wide variety of social issues from extreme poverty, polio, philanthropy and reconciliation. He has completed a triple major at the end of 2015 (Law, Honours), Science and Sociology (Honours) at the University of Western Australia.

The ethics and ethos of leadership

From the facts of multiculturalism and to the values of interculturalism

The ethics of reconciliation (from a non-Indigenous perspective)

Social justice and social policy: from research to ideas, from community consensus to political implementation