Print
ABC News finance presenter Alan Kohler is one of Australia’s most experienced commentators and journalists. Alan is the founder of Eureka Report, Australia’s most successful investment newsletter, and Business Spectator, a 24-hour free business news and commentary website. 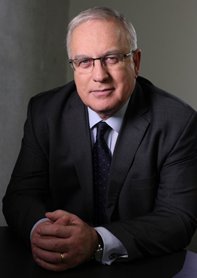 Alan was an engaging and extremely interesting speaker. He covered a huge amount of content in his keynote address and the crowd were disappointed that the address had to end.

Alan was more than happy to stay back post event to mingle with guests and keep the conversation going after the event.

All the comments were overwhelmingly positive and guests left saying how much they would love to have him come back to visit the University. Thank you so much Alan!

Alan Kohler is one of Australia’s most experienced commentators and journalists. Alan is the founder of Eureka Report, Australia’s most successful investment newsletter, and Business Spectator, a 24-hour free business news and commentary website. He also hosts Inside Business, a half-hour Sunday programme on the ABC, is the finance presenter on the ABC News - and producer of the nightly graph (or two).

A financial journalist for over 46 years, Alan Kohler, knows the world of business, commerce and finance inside out, and to say he has his finger of the pulse would be an understatement. He was Editor of The Age, and a columnist and Editor of the Australian Financial Review. Alan appeared on the ABC's 7.30 Report, and is still the finance presenter for the ABC news. Informed, current and respected, Alan speaks in real terms and provides invaluable information to his audiences.

Alan started his career as a financial journalist in 1970, at the peak of the Poseidon boom. After failing to make, and lose, a fortune he travelled the world before settling back in Melbourne as the Australian Financial Review’s Chanticleer columnist, having had a year under the expert tutelage of the first Chanticleer, Robert Gottliebsen.

He then became Editor of the Financial Review, and then Editor of The Age in Melbourne, before moving to the world of television at the ABC’s 7.30 Report, for which he was business and economics correspondent while continuing to write columns for The Age and Sydney Morning Herald and, later, the Financial Review.

His most recent endeavour began in 2005, when he launched Eureka Report, which has now become Australia’s most successful investment newsletter, and then in 2007, with Robert Gottliebsen and Stephen Bartholomeusz, he launched Business Spectator, a 24-hour a day, free business news and analysis website.

Alan is an engaging keynote presenter for the savvy investor, the financially studious and any organisation seeking a relevant and meaningful understanding of where it sits, and the opportunities available, in the economic and business marketplace.