An AFL icon, sports commentator and inspirational speaker, Alastair Lynch had a career in AFL football spanning 17 years and 306 games at the highest level, Alastair Lynch is officially a Legend and Icon.   Widely regarded as one of the game’s all-time greats, Alastair was a former captain and key member of the history-making Brisbane Lions team that won an extraordinary premiership hat-trick in 2001-02-03 to be rated arguably the best team of all time. 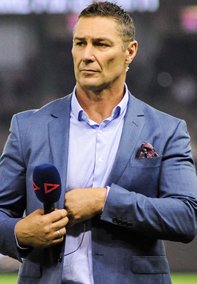 Excellent! Alastair's presentation was exactly what I wanted and the way he related his story from sporting terms to the business was great.

Would you please extend my sincere thanks to Alastair for generously giving up his time to speak at our conference. I know that our people really appreciated hearing his thoughts, as did I. His messages with respect to Effective Teamwork were relevant. The room was captivated, Lynchy was very engaging. The group has said he was the best key note address in years.

Hit the target as expected.

Alistair was very engaging, fitted in with the theme of the day beautifully and hit the mark exactly with his presentation.  He was able to relate all his experiences to our delegates and when he answered their questions he made it very applicable to their role.  He was very low maintenance and we all thoroughly enjoyed the experience.

Alastair was great, real down to earth guy. Really worked well with our other special guests.

Alastair was a fantastic choice for our event. He was both entertaining and inspirational.

Alastair Lynch was the professional we have come to see on the field and in the eyes of the public. He captured the whole audience in his open and honest approach in his commentary. Giving us the insight to his feelings in special times in his football career was first class.

Alastair was approachable by everyone all day. He was relaxed and easy to talk to and engaged readily with all the people he met. When presenting formally, he was relaxed and natural and had a nice blend of humour and interesting stories. He was a real benefit to our day, and it was a pleasure to meet him. He also contacted me directly after it was over, expressing interest in its success. Glad to recommend him to anyone looking for a real gentleman to engage their group.

Excellent! I was expecting Alastair Lynch to be entertaining but was completely surprised at just how well he spoke and how funny he was. I would recommend Alastair Lynch to anyone. Not only was Alistair entertaining on the stage but the feedback from guest sitting with him on the table was that he kept everyone engaged in conversation all night. He is a thoroughly nice guy.

Alastair Lynch travels from QLD
Fee Range: Up to $5000

An AFL icon, sports commentator and inspirational speaker, Alastair Lynch had a career in AFL football spanning 17 years and 306 games at the highest level, Alastair Lynch is officially a Legend and Icon.

Widely regarded as one of the game’s all-time greats, Alastair was a former captain and key member of the history-making Brisbane Lions team that won an extraordinary premiership hat-trick in 2001-02-03 to be rated arguably the best team of all time. He was Lions co-captain from 1997-2000 and remained a highly regarded leader of the star-studded Lions outfit despite standing down from the captaincy at the end of 2000.

Alastair had already displayed the same qualities of leadership and determination in 1994 when he was struck by a mysterious illness at the height of his AFL career. He found himself sleeping 18 hours a day, unable to train, struggling to find answers from doctors. He was eventually diagnosed with Chronic Fatigue Syndrome (CFS) in 1995. Instead of allowing the illness to derail his career, he fought back, along the way becoming an inspiration to thousands of CFS sufferers in Australia.

Alastair missed all but one game in 1995 then gradually returned to playing football at the elite level. Despite his gruelling struggle he went on to play his best football as the oldest player in the competition.

Since playing his final season in 2004, Alastair has been in high demand as a corporate motivational speaker. He is very entertaining, quickly engaging his audiences with humour and a relaxed and natural manner. Using his own experiences as a basis, he skillfully relates sporting and health challenges to the challenges facing businesses today.

Alastair Lynch stamped his indelible mark on the AFL record books in his final season in 2004 when he became the 23rd player to kick 600 AFL goals, and the 43rd player overall and the 1st Tasmanian to play 300 AFL games. He also ranks equal 5th in all-time AFL finals goals. In recognition of the high regard in which he is held by the football community, he was chosen in the Fitzroy Team of the Century and the Tasmanian Team of the Century, and was further honoured in 2004 when Tasmanian football’s highest individual award, formerly the William Leitch Medal, was re-named the Alastair Lynch Medal.

He was an inaugural member of the Tasmanian Football Hall of Fame in 2005, and was elevated to Legend status in 2006 and Icon status in 2010.

As well as his speaking commitments, Alistair also writes a newspaper column in Brisbane, is a well-regarded commentator on FoxSports and a partner and General Manager of Velocity Sports.

His best-selling autobiography Taking Nothing For Granted, published in 2005, traces his fight against CFS and his football career.

Succeeding in the face of adversity

‘Taking Nothing for Granted’ - Overcoming my Chronic Fatigue Syndrome challenges