Director of Cricket NSW professional Australian cricketer Alex Blackwell is a change agent and disruptor of Australian sport who has played more matches for Australia than any other female cricketer in history, she captained the Australian Women's Team to World Twenty20 glory in 2010 and reclaimed the Ashes against England in 2011. 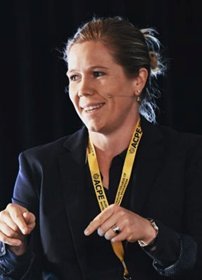 Alex spoke at the Hargraves Institute Annual Conference in March 2016 and the large audience was spellbound. The story, insights and most importantly leadership lessons were both profound and entertaining. Alex is more than just a sportsperson, she is a true Australian and a delightful presenter. Our conference is in its 11th year and we have had many great speakers and Alex is among the best. I strongly recommend Alex as a speaker to any event large or small, C suite or professional and business or networking.

We were thrilled to have Alex Blackwell speak at our annual Allambee Dinner in April 2016. As an elite sportsperson and leader, she gave us an insight into the world of international cricket and her journey to becoming Captain of the Australian women’s cricket team. But Alex also gave so much of her personal self during her talk, making the evening rich with enjoyment, laughter and admiration. Alex is an engaging, natural and entertaining speaker, able to judge her audience and respond accordingly with tales of her journey to the top, including her childhood, playing for and leading Australia and working for equal pay for women in sport. I highly recommend Alex as a speaker for any gathering.

Through her passionate and honest story telling Alex has an incredible ability relate to a range of guests in an audience from emerging and senior athletes, to professional and corporate staff and community members. Whilst Alex’s sporting excellence and star studded career speaks for itself, it is her compelling honesty and compassion that leaves audiences with a deep understanding of individual ownership and empowerment. Having faced the many trials and tribulations of competing at the highest level in her sport whilst managing a dual career and personal life, Alex offers balance and insight into her experiences in and out of professional sport, highlighting the very similar crossroads and decisions to be made between not only an athletes and career, but those in the audience. In a time where inclusion and diversity is at the forefront of the amateur and professional sporting world, Alex reminds us that authenticity, courage and standing up for what you believe in is not only inherent to us all, but will offer new opportunities and positive change in our journeys in life and sport.

Alex Blackwell travels from NSW
Fee Range: Up to $5000

Professional Australian cricketer Alex Blackwell is a change agent and disruptor of Australian sport who has played more matches for Australia than any other female cricketer in history, she captained the Australian Women's Team to World Twenty20 glory in 2010 and reclaimed the Ashes against England in 2011.

Drawing on her experience, Alex inspires audiences to reach and sustain success through innovation, adaptability, taking calculated risks and leadership. She talks her decision to pursue cricket over and above a career in medicine, choosing to become a leader, teaching others and learning to do things differently.

Alex has captained of one of the most successful sporting teams in Australia, the Lend Lease NSW Breakers. In January 2015 the Breakers won their 10th consecutive Women's National Cricket League title.

She is one of only two players to feature in all 10 consecutive wins and she was captain in the last five. In January 2016 Alex captained the Sydney Thunder to victory in the groundbreaking inaugural Women's Big Bash League and she will lead the Thunder again in WBBL02.

Alex has successfully combined elite sport with academic pursuits. She studied medicine at the University of New South Wales from 2002 to 2005 before making a difficult decision to leave the course to pursue her cricketing dreams. Alex changed her career direction to become a genetic counsellor, working for three years in prenatal screening before becoming a full time professional cricketer in October of 2014.

Well into her international cricket career, Alex remains at the top of her game. She has demonstrated remarkable adaptability and innovation as a cricketer and leader, in order to thrive in the rapidly evolving world of women's sport.

Alex came out as a gay athlete in 2012 and is a passionate advocate for diversity and inclusion within sport with a particular focus on gender equality and the inclusion of LGBTI people. In 2015 she proudly led the Mardi Gras parade alongside other out athletes Daniel Kowalski, Jai Wallace and Matthew Mitchem.

Alex is a health professional in the area of clinical genetics with special interests in differences of sex development and the concept of sport and physical activity as a medicine. She is a long term advocate for equal opportunity for all people to benefit from sports participation and actively works towards breaking down barriers to participation for minority groups.

In June 2018 Alex became the first female elected Director to the board of Cricket NSW.