Allan Sparkes CV VA is a compelling storyteller and he’ll take you into a world of adrenaline, fear, achievement and redemption. His passion will leave you holding your breath and wiping your eyes – not with sadness, but with happiness, sharing in the joy of what he has achieved and how far he has come and leaving you truly inspired. 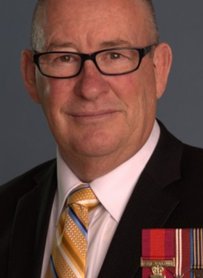 "Allan Sparkes spoke at our National Conference held on the Gold Coast in March 2015. Allan’s approach was relaxed and informal but highly engaging. He spoke openly, honestly and with sincerity. Allan held everyone’s attention from beginning to end and everyone left with the utmost respect for the man himself, and importantly the message he delivered. Allan spent plenty of time with our delegates both before and after his presentation. The feedback we’ve received since was that Allan was a wonderful choice, a brilliant and inspiring speaker. He was a delight to deal with and I’d highly recommend Allan to anyone looking for an inspirational speaker."

"I've been lucky enough to meet many inspirational people in my work but Al would have to be close to the top of the list. If his own achievements weren't impressive and courageous enough, he now dedicates much of his time to inspiring others to achieve their own meaningful achievements. Al's story is truly amazing and his ongoing work is just so valuable. I feel honoured to know Allan Sparkes and would highly recommend him to anyone looking for a genuine, authentic story-telling speaker."

"Allan Sparkes was an absolute pleasure to work with both pre event and on the day of our event. His commitment to achieving the right outcome for the client, in this instance ASFA was second to none. I have secured hundreds of professional speakers, both locally and internationally, and I would have to say that this session with Allan Sparkes, Ciaran Gribbin and Mark Donaldson VC will be amongst my most special career moments. Likewise, the 1500 delegates will remember this presentation forever, being privileged to join Allan on this journey."

Allan Sparkes CV VA is a compelling storyteller and he’ll take you into a world of adrenaline, fear, achievement and redemption. His passion will leave you holding your breath and wiping your eyes – not with sadness, but with happiness, sharing in the joy of what he has achieved and how far he has come and leaving you truly inspired.

Allan is one of only five Australians in the past 39 years to be awarded Australia's highest bravery decoration, the Cross of Valour, awarded for 'The acts of the most conspicuous courage in circumstances of extreme peril.' In December 2012, Allan, along with nine other Cross of Valour and Victoria Cross recipients, was one of only 10 Australians to be presented the Queen's Diamond Jubilee Medal. He is also the recipient of other significant awards for bravery, valour and service.

Allan served for 20 years as a frontline police officer. He was involved in the horrific aftermath of the Hilton Bombing, arrested some of Australia's most notorious criminals and faced the tragedy of murdered colleagues. Allan was involved in one of the most decorated successful rescues in Australia's history, where he and his colleagues saved the life of a young child who had been swept 600 metres down a flooded storm water pipe.

The effects of Allan's work caused dramatic changes in his career, his relationships and his life. Allan had to draw on inner strengths he never knew existed or thought possible. His life in tatters, Allan set about re-building everything that mattered to him by commencing a process of recovery, a roller coaster of successes and challenges which lasted for many years. Since he was a young child living in the west of NSW, Allan's ambition was to one day sail across the oceans of the world. Allan knew this could be the critical factor in getting his life back on course.

In March 2009, Allan, his wife and young children left Australia and boarded their yacht in England. Taking off on an adventure, many dream about but few can contemplate, they eventually sailed 16,000 nautical miles back to their home port in Australia.

Allan has appeared at many major corporate events throughout Australia. He is an inspirational speaker who will open your hearts and minds. Allan’s story is a magnificent example of turning uncertainty into reality, fear into courage and failure into success. As a speaker, Allan will take you on a thrilling ride of accomplishment. He will leave you holding your breath and wiping your eyes, not with sadness, but with happiness and inspiration, sharing in the absolute joy of what he has been able to achieve.


Allan's book, The Cost of Bravery, was published by Australia's largest publishers, Penguin Books Australia, in May 2013. The forward for Allan's book was written by renowned Australian, Mr Ray Martin AM. Allan has appeared on national TV including 60 Minutes, Sunday Night and A Current Affair. He has also appeared on Richard Fidler's conversation hour and been interviewed on many other national radio programs.

The Cost of Bravery

Mental Wellness – the process of recovery, a roller coaster of successes and challenges

Leadership on the frontline