Print
When Andrew Johns was forced into retirement in 2007, the rugby league world saluted the game’s greatest player of his era. His inclusion in 2008 in rugby league’s Team of the Century alongside legends Clive Churchill, Reg Gasnier, Wally Lewis... 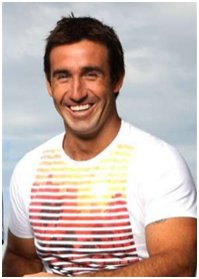 When Andrew Johns was forced into retirement in 2007, the rugby league world saluted the game’s greatest player of his era. His inclusion in 2008 in rugby league’s Team of the Century alongside legends Clive Churchill, Reg Gasnier, Wally Lewis and Johnny Raper emphasised the great halfback’s status in the game.

A recurring neck injury gave the champion playmaker no option but to hang up his boots after a record 249 first-grade matches for the Newcastle Knights on top of 27 Kangaroos and 23 NSW Origin appearances.
It was either immediate retirement or run the risk of permanent disability.

Johns – the Hunter Valley lad who went on to captain the Newcastle Knights, NSW and Australia – left the game’s playing ranks as not only its best player but its greatest drawcard.

In 1999 and 2002 Johns – at one stage the greatest points scorer in NRL history (2,176 points) – was named winner of Rugby League World magazine’s prestigious Golden Boot award as the world’s No. 1 player based on a poll of Australian, British and New Zealand journalists.

The ranking simply reaffirmed the status Johns enjoyed in the NRL competition. For five successive seasons John was voted the best player in the game in a Rugby League Week survey involving 100 players. No other player has been voted in No. 1 position as many times since polling commenced in 1986. In 2008, the magazine paid Johns the ultimate accolade when it named him the greatest player of the past 30 years. Johns also won three Dally M Player of the Year award during his star-studded career.

Former Australian and present-day NSW Origin coach Ricky Stuart is one of many influential figures in the game who say Johns was such a special player. Says Stuart, a one-time competitor and later Johns’ coach at Origin and Kangaroos levels: “Andrew Johns is the complete rugby league package – the most complete footballer in my time. You could throw him into any era and he would adapt and still be regarded as special. He was a player who thought deeply about the game. He had a greater influence on the end result than anyone else. He was always the major playmaker whose contribution to the team’s performance was extraordinary. He was able to withstand pressure to tire his opponents out. He always had to maintain a huge effort in defence and then have enough gas left in the tank to keep attacking and challenging the opposition right down to the final siren”.

Johns’ involvement in the game now centres on his associations with the Nine Network, MMM, ninemsn and Hyundai and in skills coaching with a number of NRL and rugby union clubs.

Andrew speaks in a Q and A format on topics such as leadership, team building and the importance of mental health awareness.
Subscribe
© 2022 Platinum Speakers