Print
Andrew MacLeod has extensive experience in multicultural and multi-religious settings. He has faced strategic, large-scale and diverse challenges, successfully resolving them through negotiation and leadership. He is a leading thinker in ‘Shared Value’ understanding risks and opportunities that exist between communities and corporations. 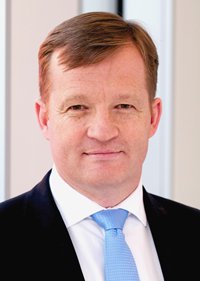 Andrew is an impressive and inspirational speaker on leadership, as well as a highly respected leader in his own right. When he has presented on leadership, audiences have consistently rated him highly on delivery and practical advice. His motivating style and progressive thinking are impressive aspects of his delivery. With a wealth of knowledge and experience from a highly successful track record of taking teams forward and delivering results, Andrew understands what is necessary to motivate people, and equally is able to impart this knowledge to his audience.

Andrew MacLeod is a leading thinker and pioneer in driving partnerships that are profitable for both business and the community. He is a compelling speaker with a commanding approach that had our entire audience engaged and inspired to shift their thinking and take initiative toward a much smarter way of operating. Andrew was a pleasure to work with and his professional manner and interest in meeting client expectations and delivering a high quality result stood out as a real point of difference. Andrew has the courage to ask the hard questions and challenge people to work at a higher level of meaning and purpose!

Professor Andrew MacLeod has extensive experience in multicultural and multi-religious settings. He has faced strategic, large-scale and diverse challenges, successfully resolving them through negotiation and leadership. He is a leading thinker in ‘Shared Value’ understanding risks and opportunities that exist between communities and corporations particularly in fragile states.

MacLeod has led or served in multinational humanitarian teams in conflict and natural disaster settings as diverse as Rwanda, Pakistan and Bosnia, negotiating with the varied religious and cultural stakeholders. Additionally has led business engagement with commercial, political and community stakeholders in economies including Mongolia, Peru and Australia.

Andrew is the former Managing Director of Good Super in Australia, non-Executive Director for New York based Cornerstone Capital and was the CEO of the Committee for Melbourne 2006 – 2008. Historically he worked as a high level humanitarian official with the International Committee of the Red Cross and the United Nations in wars and natural disasters.

In 2005 he was Chief of Operations to the UN’s Emergency Operation Center in Pakistan in the wake of the devastating earthquakes and his team lead the South Asian relief and reconstruction operation for 2 ½ years across Pakistan, Afghanistan and Iran. His career has spanned humanitarian, government and business, always focussed on the interface between corporations, government and communities, finding ways to solve large-scale challenges.

Professor MacLeod is a visiting Professor at Kings College London and an Affiliate Senior Associate to the Center for Strategic International Studies in Washington DC. In the business world he is a Non Executive Director of New York based Cornerstone Capital, a Senior Adviser to Homestrings plc in London and Chair of the Advisory Board at Gravitas Capital.

When at the UN MacLeod’s work included Chief of Operations for the 2005 South Asian Earthquake relief and reconstruction operation, spending 2 ½ years between Pakistan, Afghanistan and Iran. MacLeod ensured smooth integration between foreign aid operations in areas under Pakistan military and non-military control including the negotiations with military and non-state armed groups.


For the International Committee of the Red Cross MacLeod undertook similar roles in Rwanda and former Yugoslavia during the 1990’s. He has applied his learning in these contexts as part of the Kings College Humanitarian Futures project and the World Economic Forum’s Future of Civil Society project.

In business he has been GM Community, Communications and External Relations for Rio Tinto (Copper), was an advisor to the Sustainable Accounting Standards Board, raised capital for Gane Energy Australia, was the interim Managing Director of Good Super in Australia and led strategic urban based thinking while CEO of Committee for Melbourne.

He assists numerous charities including The Big Issue (Australia) and Swags for the Homeless. He maintains a Commission as an Australian Army Officer (reserve).

MacLeod is the author of ‘A Life Half Lived’ published by New Holland Press. He is a sought after speaker on the speaking circuit and an experienced and competent commentator in the electronic and print media.

Andrew MacLeod is a strong keynote speaker, panel facilitator and panellist. His engaging speaking style, with a strong message, enhances every senior leadership gathering. View the show reel or one of the sample presentations below for a taste of that which he offers.

•Demographics and Their Implication for Business, Liveability and Prosperity

•Innovation and Creativity in Business and Society