Unprecedented Socceroos success headed by Postecoglou came recently with The 2015 AFC Asian Cup tournament which was hosted by Australia. The host country and South Korea reached the final and Australia won the title after defeating South Korea 2–1 in extra time. 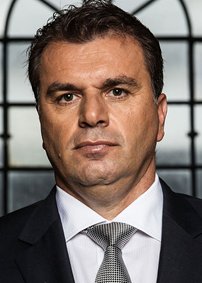 Ange Postecoglou continues to rewrite football history, his recent unveiling in New Delhi as the Asian Football Confederation’s 2015 coach of the year adding to his swag of notable achievements.

What made the occasion doubly proud for the Australian Socceroos head coach was that Australia’s national team was voted the best in Asia in 2015.

Less than 18 months into his reign as the Socceroos boss, Ange Postecoglou struck gold when his regenerated team hoisted the Asian Cup in front of 75,000 delirious football fans at ANZ Stadium in Sydney in early 2015. It was Australian football’s finest and proudest moment, with victory coming in extra time to shut out South Korea 2-1. The history-making victory provided a clear signal that the new generation Socceroos had begun their emphatic march to win international recognition.


Born in Athens and having migrated to Australia with his parents aged five, Postecoglou’s impressive grounding as a premiership-winning player and coach made him the ideal choice to take charge of the Socceroos when he was appointed by Football Federation Australia in late 2013.

With Ange’s experience on/off the field, playing, coaching, effecting change and building and leading successful teams, he makes the perfect keynote speaker for Corporate Events, Sportsman Dinners, Private School Functions, Sporting Clubs, Charity & NFP events. Each speaking engagement can be tailored to the specific requirements of your organisation however there will always be an element of management and leadership attached to each presentation.

Ange Postecoglou played 193 games from 1984 to 1993 for South Melbourne FC in the National Soccer League, where he was involved in their 1984 and 1990–91 titles, the latter as captain, before moving into coaching. He coached South Melbourne from 1996 until 2000, where he led South Melbourne FC to consecutive NSL titles in 1997–98 and 1998–99, as well as winning the 1999 Oceania Club Championship, which in turn led to their participation in the 2000 FIFA Club World Championships.

In his international playing career, he represented Australia on four occasions between 1986 –1988, as well as representing Australia at youth level in 1985. After the 1999–2000 NSL season, he stood down from the South Melbourne FC coaching role when he was appointed coach of the Australian youth team. He is the only person to have been involved in all four of South Melbourne's National Soccer League title-winning teams, the first two as a player and the latter two as coach.

He commenced in the role as U17/U20 National Coach in 2000 up until February 2007 after Australia failed to qualify for the 2007 FIFA U-20 World Cup. During his time as coach of Australia's National Youth teams, Postecoglou played a major role in identifying and developing young Australian players.

Following his departure as coach of the Australian youth teams, Postecoglou worked as a football pundit for Fox Sports and as an elite consultant to Football Federation Victoria. Panachaiki In March 2008 he was appointed coach of Greek side Panachaiki. In December 2008, he resigned from the Panachaiki position to return to Australia for personal reasons.

In October 2009 Postecoglou was signed as the new Brisbane Roar coach, and started rebuilding the team replacing several key players. Postecoglou, who asked to be judged a year from the time he took over, proved the critics wrong by winning and playing an entertaining brand of football.

Postecoglou led the Roar to the Premiership and Championship in the 2010-11 season, winning the Grand Final in front of 52,168 people at Suncorp Stadium. The Roar only lost 1 game all season and went on a 28-game unbeaten run, which broke the previous Australian football record.

His focus and challenge is now squarely on Australia qualifying for the 2018 FIFA World Cup.

An insight to the Socceroos