Print
Anna Meares is one of Australia’s most  successful track cyclists.  Anna is dedicated, committed and driven in all facets of her life which has led her to the great highs in competition.  Inspiring audiences with her story, Anna Meares leaves audiences captivated and engaged. 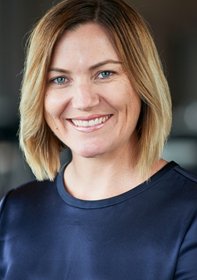 "Anna was such a lovely person, and had a wonderful story of sheer determination that moved us all"

"Anna was brilliant, she was warm, professional, engaging, motivating, emotional, genuine and funny.  Anna had the room captured, she ran over time but that was absolutely fine because guests were loving her.  Anna exceeded my expectations.  We have received so many comments from guests.  Anna worked the room talking to the guests at pre-dinner drinks and around the boardroom table (50 people). Anna met with me before 29/9 to view the room, talk through the event and personally sign her book, which each guest received."

We did not have one negative comment and some of our toughest guys were moved to tears. Others commented this was our best speaker yet.

Anna is an absolute inspiration.  Our clients were intrigued with her amazing journey and hanging onto every word! A few even got emotional!

Booked after hearing her at the women’s showcase a couple of years ago, Anna did not disappoint. Her story is inspiring, engaging and uplifting.  She was also a beautiful person to deal with.

Anna was excellent. Her story and delivery was inspiring and really fit into our overall conference theme and messaging

Anna was a fantastic speaker and consummate professional. She spoke honestly and passionately which absolutely shone through. Our audience were totally engrossed in what she had to say and we had a lot of requests for autographs and photos afterwards.

Anna Meares OAM is one of Australia's favourite sports stars and one of the most talented athletes in the world. She is a 4-time Olympian, 2-time Olympic champion with 6 Olympic medals (Bronze - Rio 2016, Gold and Bronze - London 2012, Silver - Beijing 2008, Gold and Bronze - Athens 2004), 11 time world champion across four different disciplines and a five time Commonwealth Games champion and she was the flag bearer for the Glasgow 2014 Australian Commonwealth Games and the 2016 Rio Olympics where she was also the Australian Olympic Team Captain.

She is a 35-time Australian track champion and has held Olympic, World, Commonwealth and National Records. In Rio Anna was selected as the Nations Flag bearer for her fourth Olympic team. She proved an inspirational and connected leader who also delivered individually winning Bronze in the keirin. This bronze was Anna’s 6th Olympic medal from nine Olympic starts over her career. This bronze also become historic when in winning it Anna became the nation’s only athlete from any sport to medal individually at four consecutive Olympic Games.

In the 2012 Olympic Games Anna won Bronze in the team sprint with Kaarle McCulloch and later Gold after an exciting photo finish and with a great tactical display over her long-time arch rival Victoria Pendleton of Britain in what now is one of the most iconic battles of those games.

Anna launched into the track cycling world scene in 2004 when she claimed her maiden world title in the 500m time trial at the world championships held in Melbourne, aged 20. Just a few months later, she went on to claim her first Olympic gold in Athens in the 500m time trial - also becoming the first woman in the world to break the 34-second barrier claiming the World and Olympic record in the process - and won bronze in the sprint. One of her most remarkable achievements was her silver medal in the sprint at the Beijing Olympics in 2008 - Australia's only cycling medal of the Games - just seven months after she broke her neck in a horrific crash at a World Cup meet in Los Angeles. Her spirit of sportsmanship, her never say quit attitude, her passion and focus on the goal and her dedication and hard work - are the hallmarks that define her as a champion and a winner.

In the 2015 World Championships in Saint-Quentin-en-Yvelines, France, Anna won her 11th career World Title in the keirin making her the most successful and decorated female track sprint cyclist in history.

Her success on the track is not the only thing that drives Anna. She has chosen to be a strong contributor to her community serving as an ambassador for Cycling Cares, which links in with Neale Daniher and Ian Davis’s foundation, FIGHT MND, after her coach of 8 years, Gary West was diagnosed with Motor Neurone Disease upon returning home from the Rio Olympics. Anna also ambassadors for the Little Heroes foundation for kids with serious illness, helping to raise funds for a worthy cause and put a smile on the faces of the children fighting seemingly undefeatable disease and providing inspiration to their families and for the Port Adelaide Football Club and community.

Anna is an author having written her own biography 'The Anna Meares Story - The fighting spirit of a champion' and she is an accomplished speaker having given numerous talks about sportsmanship, success and the power of the mind over body. "Success is not about staying un-defeated" she says soberly "It's about how you handle the defeats - that's what makes a true champion - on the track and off it".

And Anna has proved again and again that that is what she is a - true champion.