In September 2018, Seibold was named Dally M coach of the year in his season with the Rabbitoh's.  'Seib's'  joined the Brisbane Broncos in December 2018, having been a highly-successful coach for more than a decade in Australia and the United Kingdom. 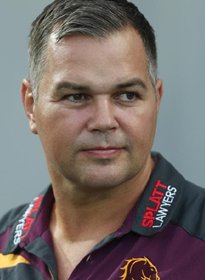 Anthony Seibold joined the Brisbane Broncos in December 2018, having been a highly-successful coach for more than a decade in Australia and the United Kingdom.

2018 Dally M Coach of the Year Anthony ‘Seibs’ Seibold was the South Sydney Rabbitohs Head Coach. Anthony Seibold began his coaching career in 2011 and has been an assistant coach at top NRL Clubs such as the Manly-Warringah Sea Eagles (2016) and Melbourne Storm (2013-2015).

As a player, Seibold had stints at the Brisbane Broncos (1992–1995) and Canberra Raiders (1997–1998) throughout the 1990s, where he played in the National Rugby League. In 1999 Seibold signed for the London Broncos where he played two seasons in the English Super League.

Seibold played for the Ipswich Jets in the 2002 Queensland Cup Grand Final before returning to the UK. In 2003 he signed for the Hull Kingston Rovers, where he captained the team during their 2003 and 2004 seasons. He returned to the Brisbane Broncos organisation in 2005 where he captained the Toowoomba Clydesdales team in the 2005 Queensland Cup.

In 2006 he moved to Wales where he was assistant coach at Celtic Crusaders between 2006 and 2009, playing in the first season. He helped to lead the club to Super League and assisted John Dixon in their first season at that level.

Seibold has a Bachelor of Teaching and a Masters of Education and lectured in the Faculty of Education at the University of Southern Queensland after his retirement from rugby league.

Following his spell at Crusaders, he took on his first head coach role, at South Wales Scorpions where he led the club to the play-offs in the club's first ever season. He then moved back to Australia to coach in the Queensland Cup.

After working as an Assistant Coach at the Melbourne Storm under Craig Bellamy, Siebold was recruited to join the Manly Sea Eagles before joining the Rabbitohs. He also enjoyed two victorious seasons as the Assistant Coach of the Queensland State of Origin team, before being named as Michael Maguire’s right hand man at the South Sydney Rabbitohs in 2017.

On October 6 2017, Seibold was announced as the new South Sydney Rabbitohs coach. In his first year as Souths coach, Seibold guided the club to a third placed finish at the end of the regular season. Souths went on to reach the preliminary final but fell short of a grand final appearance losing 12-4 to Eastern Suburbs. On 27 September 2018, Seibold was named Dally M coach of the year.

The importance of Leadership

Teamwork – How to maximum performance

Lessons from my coaching career