The world first knew Arnold Schwarzenegger as a famous bodybuilder and a Hollywood action hero, and now as California's 38th Governor, an environmental crusader, a successful businessman, and a generous philanthropist. 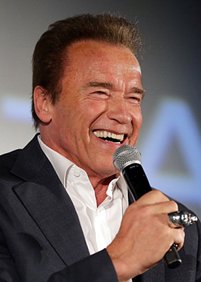 One of the major accomplishments Schwarzenegger achieved as Governor was the establishment of the Global Warming Solutions Act of 2006 - a bipartisan agreement to combat global warming by reducing California's greenhouse gas emissions. His Strategic Growth Plan aimed to reduce congestion and clean the air; the Hydrogen Highway by Executive Order supported the transition to a clean hydrogen transportation economy; the Million Solar Roofs Initiative had the goal of bringing 3,000 megawatts of clean energy online by 2017; and the Safe, Clean and Reliable Drinking Water Supply Act was passed in 2010.

Other successes include leading the reform to make California competitive for up to $700 million in federal Race to the Top funds, which ensures that all California's students have access to the world-class education they need to thrive. He signed legislation making the state's school nutrition standards the most progressive in the nation and also, his support for the After-School Education & Safety Act in 2002, has made California the first state to significantly invest in a comprehensive after-school program.

He received the Simon Wiesenthal Center's "National Leadership Award" for his support of the organisation's Holocaust studies. In 2002, Schwarzenegger was awarded the Muhammad Ali Humanitarian Award.


As a businessman, his first investment was in a brick laying business. He followed this with a mail-order bodybuilding equipment company and invested in real estate, becoming a millionaire before he started his acting career. He was a founding investor in the Planet Hollywood restaurant chain.