Print
This ‘awesome’ comedy band have taken the world by storm. In the short time they have been performing together, they have impressed audiences at the most heavy hitting comedy events including the prestigious invite-only Montreal ‘Just for... 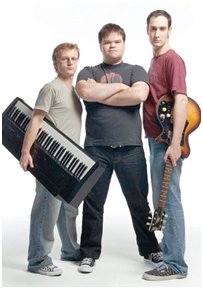 Testimonials for Axis of Awesome

This ‘awesome’ comedy band have taken the world by storm. In the short time they have been performing together, they have impressed audiences at the most heavy hitting comedy events including the prestigious invite-only Montreal ‘Just for Laughs’ Festival and three sold out seasons at the world’s largest arts festival ‘The Edinburgh Fringe.’


The individuals that make up Axis of Awesome comprise Jordan Raskopoulos on lead vocals, Benny Davis on keyboard and vocals and Lee Naimo on guitar and back up vocals.

Jordan is best known for his work on ‘The Ronnie Johns Half Hour’ on Channel 10. Currently a National Theatre speakers-sports champion, Jordan was nominated for Best Newcomer at the 2007 Melbourne International Comedy Festival for his one-man show, ‘The Adventures of the Man With the dominant Claw’.

Benny Davis is a classically trained musician and is the man who brings a touch of class to the Axis….and a portable keyboard. As an original member of the sketch comedy troupe ‘The Delusionists’, Benny was a stand out in their 2007 Melbourne International comedy Festival Show. A regular cast member of almost every improvised comedy show in Sydney, Benny is a virtuoso on the keyboard.

Lee Naimo is one of Sydney’s best improvisers and the current National Theatre speakers-sports Champion as well as co-creator of the hit live show, ‘Scrabble Unscripted’, which was a sold-out success at both the Melbourne and Cracker comedy Festivals in 2006, 2007 and 2008. Lee enjoys sunshine and the music of the Dixie Chicks.

In their latest show ‘Songs in the Key of Awesome’ which premiered at the Edinburgh Fringe, the trio received multiple 5-star reviews and were described as ‘a superbeast of high energy, high impact comedy’ (chortle.co.uk). Their ‘Four Chord Song’ is also the highest rated comedy video of all time on YouTube, receiving over 24 million hits.

Closer to home, they’ve had sold out seasons at the Adelaide Fringe and Cabaret Festivals, the Sydney and Melbourne International Comedy Festivals and the Singapore Flipside Festival, have appeared on Channel Ten’s ‘Good News Week’ and the Nine Network’s ‘The Footy Show’. They picked up the Time Out Award for Best Australian Act at the Sydney Comedy Festival and were recipients of the prestigious Moosehead Award for their 2008 first ever Melbourne International Comedy Festival show ‘The Axis of Awesome comeback Spectacular’.

Their new DVD ‘The Axis of Awesome Live’ is already a hit with audiences worldwide and their debut album ‘Scissors, Paper, ROCK!’ which has recently been released is bound to be a hit also.
Subscribe
© 2022 Platinum Speakers