Print
Barrie Cassidy is one of Australia's most respected and trusted journalists. Now the founding host of Insiders Barrie Cassidy returned to the ABC with One Plus One, a new series of interviews with fascinating people on the topic of leadership. 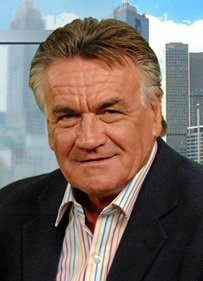 Barrie transformed our presentation to drive thought-provoking, vigorous and insightful conversation at The Creative Economy Forum. Leading with a wealth of experience and knowledge, Barrie explored our content with industry focus and vision – exceptional!

Barrie Cassidy travels from VIC
Fee Range: Up to $5000

Barrie Cassidy is one of Australia's most respected and trusted journalists. Now the founding host of Insiders Barrie Cassidy returned to the ABC with One Plus One, a new series of interviews with fascinating people on the topic of leadership.

Barrie is a veteran political journalist and was the presenter of Insiders, ABC TV's political commentary program, since 2001 and has become the must-watch political news and interview program for all politicians and news enthusiasts alike. Each week, it features an interview with a senior politician as well as debate and discussion by a panel of experienced political journalists, predominantly drawn from the Canberra Press Gallery.

Barrie is regarded as of the nation's best and most experienced political journalists whose interviewing and analytical skills are second to none. These attributes, along with his sense of humour, have been the key to the success of the program.

Barrie spent his early years on regional papers and covered state politics until he moved to Canberra in 1979 to become the ABC's federal political correspondent for radio and television.

In 1986 Barrie was approached by former Prime Minister Bob Hawke's to become his senior press secretary - a role he held for four years - and his senior political adviser. He has worked overseas as a correspondent, covering the news in the major political capitals of the world. He was US correspondent for The Australian in Washington during the Clinton Administration then European correspondent for the ABC, based in Brussels.

Barrie returned to Australia to host Meet The Press and The Last Shout for Network Ten then joined the ABC as host on The 7:30 Report. As well as being a political correspondent for ABC TV and a radio and political analyst, Barrie is a former president of the parliamentary press gallery in Canberra.

Barrie's first book, Party Thieves, was an analysis of the 2010 election campaign, a tumultuous eight months in politics, and charts the downfall of Kevin Rudd and Malcolm Turnbull.

In 2012, Barrie Cassidy won the Quill Award for Best Columnist/Blogger. The Quill Awards for Excellence in Victorian Journalism are the premier media awards in the state. His winning entry consisted of a number of pieces published on The Drum website, including 'Prisoner of war: my father's story' and 'Leadership tussle: Rudd circles, Gillard stumbles'.

Cassidy was awarded a Lifetime Achievement Award at the 2018 Quill Awards presented by the Melbourne Press Club in March 2019. In accepting the award, he announced his decision to retire from Insiders later that year.

In 2020 the ABC announced Barrie’s return as the host of the long form interview program One Plus One, with a special series focusing on leadership.

After more than 45 years as a journalist, Barrie has certainly earned the title of veteran and the respect that comes with it. It's no wonder that he is frequently in demand as a speaker and as a highly sought after experienced and thought provoking moderator, facilitator and panel host at both political and non-political events.