Print
A respected and successful businessman, Ben Collins has driven some of the fastest cars on the planet. Best known as ‘The Stig’ on Top Gear, Ben has also worked as stunt doubles for some of the top international actors. Ben also produced a bestselling memoir The Man in the White Suit. 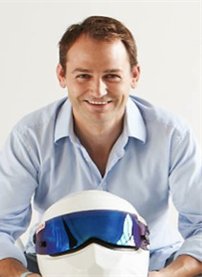 “Ben is extremely personable and continues to host some of the most productive corporate events we run in the UK. He has become like a part of our team and his approach really engages all our guests, which is why we enjoy working with him so much!”
DHL
Ben Collins travels from International
Fee Range: POA

A respected and successful businessman, Ben Collins has driven some of the fastest cars on the planet. Best known as ‘The Stig’ on Top Gear, Ben has also worked as stunt doubles for some of the top international actors. Ben also produced a bestselling memoir The Man in the White Suit.

As the Stig, Ben Collins was the benchmark of speed against which all other drivers set themselves, and the man that everyone from Formula One World Champion Nigel Mansell to Jenson Button tried and failed to beat. He has raced successfully in almost every class imaginable, from Formula 3 and Le Mans 24 Hour competition to American Stock Car Racing. Jackie Stewart watching a young Ben winning a Formula 3 race, was blown away, “When you see the likes of Ben Collins in Formula One, remember you saw them here first.” It was, however, the moment Ben disguised himself in white suit and helmet, that he became instantly recognisable.

Ben has put every known supercar to the test, racing the world’s greatest cars, from the Bugatti Veyron and Ferrari 430 Scuderia to a London Routemaster. From the anonymity of his white helmet he taught some of the world’s most famous stars how to lay down a fast racing lap, managed to catch a parachutist in his moving car and coached a blind man how to take on a chicane. Few others, if any, have taken on a British Army tank division in a Mitsubishi Evo 7.

Ben is most famous for his role as the Stig, but he is respected as a focussed and successful businessman. Collins Autosport has supplied precision drivers for Top Gear and Hollywood, with Ben commanding James Bond’s Aston Martin in the recent James Bond films and performing as Nic Cage’s stunt driving double. Ben’s company offers the ultimate driving challenge in some of the fastest cars on the planet to an international clientele who are looking to take driving to a whole new level.

Ben’s bestselling memoir, The Man in the White Suit (The Stig, Le Mans, The Fast Lane and Me) charts a life of passion, commitment and a determination to succeed in the highly competitive adrenalin fuelled world of motor sports.

Ben has a gift for putting the audience in the driving seat and communicating his experiences in a way that people can relate to. As a motivational speaker, he has addressed corporations all around the world, using the extremities of his profession to highlight how core beliefs can overcome the most challenging situations in our lives and business environments.

Motivational
Ben is an expert on driving and the mental aptitude required to be a professional in this highly competitive environment. He provides insights on what it feels like to race. A high pressure environment where split-second decisions determine success or failure, and total focus is the key to unlocking potential: skills that can be applied to the challenges of the workplace. “As is so often the case in every day life, it’s the little things that count in motor racing. To go that fraction faster through a corner than the next man means stretching yourself and believing it’s possible when everything is telling you it’s physically impossible.”

Team work
The Driver in a racing team sits at the hub of a group of experts channelling their unique skills towards the goal of winning. Every individual is linked by that shared vision and invariably it is the weakest link in the chain that determines whether the Team will win or lose. Words like camaraderie, commitment, motivation, team-work and trust find their true value when a racing car slides into the hands of the pit crew, at 3 o’clock in the morning of a 24-hour race, for a tyre change and a refuel during a monsoon.

Inspiration
Ben’s career was forged by competition and the search for inner strength. The Stig epitomised a superhuman quality that was effortless and matter of fact, but the man behind the mask had to dig very deep for every victory, every lap time and every inch of tarmac. His story is not one of indomitable victory, but of learning to overcome setbacks, of personal risk taking and survival, and a little luck too.

Anecdotal
Ben spent his early days as part of a local swimming team, where by the age of 7 he was swimming nationally at junior Olympic standard. In later life he passed selection to join an Elite Airborne regiment of highly-trained Army reservists, where he also served as an evasive driving instructor. And of course his hugely successful career in motorsports, covering his experiences of winning in Formula Three, NASCAR and Le Mans where he and his Team recently captured the Championship Title. Ben is in high demand as a speaker due to his unique career and continuing success. His entertaining anecdotes and tales of incredible stunts make for a truly inspirational talk. At its core is a story of strong commitment and an iron will that has determined Ben’s position as a world class performer.
Subscribe
© 2022 Platinum Speakers