Ever wanted to meet Arnold Schwarzenegger, Owen Wilson or even Homer Simpson? Well chances are, if you spend enough time with Ben Price you’ll be holding a conversation with them before long. A gifted mimic, comedian Ben Price will have you thinking you are talking to the real deal as he rolls through his perfectly polished repertoire of impersonations. 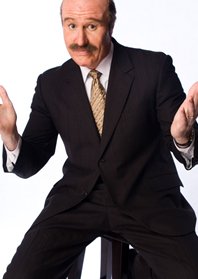 An excellent all round performance with great impersonations and comedy. Ben's interaction with the group was a feature of his performance.

Ben's impersonation of John Cleese is very good and his voice is spot on. It was a pleasure working with him over the last few weeks.

I just wanted to let you know that the event on Friday was a success and how I can’t speak highly enough of Ben – not only was he personable and a pleasure to have at lunch, he was an amazing entertainer. In the 6 years I’ve been organising the event, I have never had so many people so happy with the choice of entertainer. All I can say is that he was brilliant and I wish him every success.

He came in as a bumbling English Nurseryman with an innovative idea for tracking plants - confused the life out of the professionals in the industry. He even managed to get them asking questions before revealing his true identity - which one would that be? He has his characters down to perfection - turn around and you wouldn't know you were listening to an impersonator. He was great fun. Excellent!

Nursery Garden and Industry of Victoria

Ever wanted to meet Arnold Schwarzenegger, Owen Wilson or even Homer Simpson? Well chances are, if you spend enough time with Ben Price you’ll be holding a conversation with them before long. A gifted mimic, comedian Ben Price will have you thinking you are talking to the real deal as he rolls through his perfectly polished repertoire of impersonations.

Since competing in the Grand Final of the 2011 season of Australia’s Got Talent, Ben has become a highly sought after comedian, heard around the country on various FM stations. His recent one-man show, Ben Price in Celebrities Got Talent sold out every performance and he had the honour of taking on the persona of Bear Grylls as the face (and voice) of the Caravan and Camping Show’s media campaign.  He’s also a regular guest on Kids’ WB on GO Channel.

Ben discovered his talent for impersonating voices at the age of 10, and used his unique talent to entertain classmates and pull pranks. Since growing up (well kind of!)  He has developed an impressive repertoire of over 100 character voices, including Dr Phil, Liam Neeson, Robert DeNiro, Morgan Freeman, Sir Sean Connery, Australian PM Tony Abbott, John Cleese, Barack Obama, Tom Cruise, Donkey, Shrek, Homer Simpson and many more.   His impersonations are exact in sound, and in full costume and make-up, Ben can also look the part, mimicking his subject’s exact mannerisms.

Ben has performed several times in the Melbourne International Comedy Festival, with sell-out shows in 2000 with Melbourne the Musical, 2001 with Who Am I? and 2003 with The Best Show Ever. In 2006 he performed the hugely successful Hollywood Live & Uncut at The Palms at Crown and in 2007 he had sellout shows performing as Dr. Phil in What were you thinking?  This was followed by a successful regional tour all over Victoria.   He’s appeared on Channel Nine’s A Current Affair as Dr .Phil, The Comedy Channel on Foxtel and on Channel Ten’s The Panel Christmas Wrap as Ian Thorpe. Ben has appeared on various other TV shows; including The Footy Show, The Sunday Footy Show, Rex Hunts Footy Panel, The Today Show, Studio 10, The AXA Grand Final Breakfast, Live n’ Kicking, In the Limelight and The Good Friday Appeal.

Ben Price has made appearances in TV commercials for such brands as Toyota, Holden, Just Klapp, Just Jeans and Victorian Caravan and Camping Show.  His many character voices have also been used for several radio campaigns.

Ben Price is a national talent at an international level, having performed overseas on many occasions, and most recently wrapping up a comedy tour of New York at Dangerfield's Comedy Club.

Ben’s material is clean and can adapt to any organisation or event.  He is a versatile talent who can appear in character if requested, or perform MC work as himself, while incorporating many characters into a routine.

With so much experience in the corporate sector and circuit work, and with so many characters, it’s no wonder Ben Price is known as Australia’s Best Impersonator!