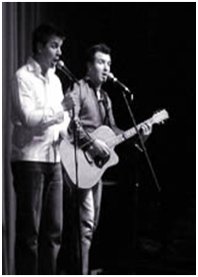 "Big Brother Little Brother were fantastic, they had everyone rolling in the aisles."
Nestle Peters

"I would recommend them for any work party or corporate function."
Lumley General Insurance

"They were funny, clever and excellent ambassadors for Australia."
Australian Defence Force

"They were really fantastic. I loved the Scottish National Anthem!"
Subaru Australia

Since winning a prestigious, national comedy competition in 2002, Big Brother Little Brother have gone on to perform all over Australia and the world.  They’ve appeared on television and radio, performed at Parliament House and even entertained our troops in Iraq and Afghanistan, not once, but three times.  They are also seasoned professionals when it comes to corporate audiences. Half Polish, half Scottish, half Aussie (yes, they failed maths!), Big Brother Little Brother combine hilarious gags with even funnier songs...


Big Brother Little Brother is a hilarious musical comedy duo that is guaranteed to liven up any corporate event, sporting function or conference.

Half Polish, half Scottish, half Aussie, Big Brother Little Brother combine hilarious gags with even funnier songs that’ll have you and your audience singing in stitches - like a classic Aussie rock song sung in Polish, a totally outrageous version of the Scottish National Anthem and an Airline Safety Demonstration for the new millennium.

Whatever the corporate event, if you’re looking for a Corporate Comedian that is different, funny, cheeky, clever and full of energy, then Big Brother Little Brother is for you.

Big Brother Little Brother is comprised of real-life brothers Adam and Matthew Hedditch. This musical comedy duo won the national comedy competition in 2002, and has appeared on numerous television shows, events, and radio spots. Loved by all, they have performed at Parliament House and gone overseas to Iraq and Afghanistan three times to perform for the troops. They have appeared on The Comedy Network and are regulars on The Footy Show, for which they received an award in 2005.

Billing themselves as “corporate comedians”, Big Brother Little Brother’s skit generally includes an attempt at being a boy band, with one playing guitar while the other jams out on the triangle. They specialise in getting even the most stuffy businessmen and women the laugh of a lifetime, and have spoken at events for everything from banks to Nestle.