Print
BigCityBeat has been described as the most versatile corporate show band in Australia! With amazing variations in shows and line-ups, they can cater for the smallest function to a major gala performance. Stunning costumes & sizzling... 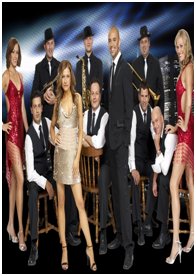 This band has it all. They know how to read the crowd and adjusted the music for the occasion. So many people commented on their performance... sensational. I can't recommend them highly enough.

We are always happy with Big City Beat and this was no exception.

“I have had the pleasure of working with Brian Rault since 2004.  Brian is always accommodating to our themes and goes above and beyond our expectations. He has such a passion for entertainment and helps Reach with our overall success with our events.”

Thanks to you and the band for playing at our going away party. We had such a great night at our friends birthday party (when we first saw you) that we decided we would book your band, and we weren’t disappointed. It’s nice to deal with a band that doesn’t have ego’s, operates like a professional business and gets the job done with a minimum of fuss. You played all the right songs for our crowd and I can’t tell you how many people came up to Deb and I and said what a great band you were. We’ll definitely use you again. Thank you!

BigCityBeat has been described as the most versatile corporate show band in Australia! With amazing variations in shows and line-ups, they can cater for the smallest function to a major gala performance. Stunning costumes & sizzling choreography give the band commanding presence on stage accentuated by the BCB dancers and the acclaimed Brass Section. With an impressive repertoire that embraces party favourites, popular rock classics with a good dose of today’s Top40 hits, BigCityBeat ensures everyone has a party!

Based in Melbourne Australia, BigCityBeat is an international phenomenon with shows that embrace all ages and cultures! Most importantly, BigCityBeat has a show option to suit your budget and event whether it be the 5 piece line-up or the full, deluxe 11 piece Showband.

The overwhelming attribute that BigCityBeat exudes is great musicianship coupled with an unbridled sense of fun on stage. They generate enthusiasm and energy but remain true to musical accuracy. Whilst many acts may exhibit some of these qualities, very few have all of them jam packed in one spectacular show! With the members that formed the nucleus of Ricky Loca and now BigCityBeat, they have entertained clients all over Australia & abroad. In the last 12 months the band has performed shows in Singapore and Beijing and is booked to perform in Muscat, Oman on NYE. They are renowned in the industry as an entertainment guarantee which ensures your guests have a wonderful time.

The founding member of BigCityBeat and Band Manager, Brian Rault is one of the most outstanding live cover band performers of today. As BCB’s male lead vocalist, his blend of raw energy and refined showmanship captures the audience right from the start of the show. Brian makes sure you feel a part of the show with humour and daggy dancing down to a fine art!

Jaime is renowned for her amazing vocals and is a highly credentialed performer already fronting some of Australia’s highest profile live cover bands. As high energy performer and with a cheeky sense of fun, Jaime adds another dynamic dimension to BigCityBeat.

The rhythm section is made up of the best musos Australia has to offer. All have toured their own bands at home and internationally and all are session musos deriving a livelihood from being the masters of their craft. They form the backbone of the BigCityBeat Show Band and delight in musical authenticity.

Top40 Party Classics Show
The Top40 Party Classics show is available in all line-ups (listed above). Showcasing all the greatest hits from the last 3 decades and the current top40 charts, the show is a smorgasbord of musical highlights. Featuring the acclaimed Dag Medleys and the infamous Rock Medley (inc mullets), the show caters for every age group who wants to dance! From Justin Timberlake to Jackson 5 - from Whitney Houston to Pink, all the greatest artists feature in this extensive repertoire show.

Megastars Show
The infamous BigCityBeat Show that has taken the band to Tokyo, Singapore & all parts of Australia. Everyone’s talking about the Megastars Show!!
The Megastars Show is a 55 minute Showcase set featuring 6 of the world's greatest entertainers, delivering an 8 minute powerpack of each Artists greatest hits. Artists featured in this set are:
Madonna
Kylie Minogue
Prince
Michael Jackson
Queen
Tina Turner
Not to be missed, this showcase delivers glamorous costumes and striking choreography to complement the outstanding musical arrangements. Featuring the full band including 3 piece brass section and 2 female dancers. The show can also include a percussionist.
Your night will consist of:
Set 1 - 45 min Top 40/ Party Music
Set 2 - 55 min Megastars Show
Set 3 - 45 min Top 40/ Party Music

3 Decades in 3 sets!
A show that embraces the fashion and music from the 3 decades that shaped the Pop music scene of today. The 10 piece band plays each set in full costume embracing the groovy, the funky and the daggy in 3 x 45min sets.
Subscribe
© 2022 Platinum Speakers