Print
Stage Hypnotist Bill Wheeler’s comedy hypnosis show, can only be described in one word, “Mesmerizing”. With his performance as a hypnotist being both dynamic and electrifying, Bill combines the mystic art of hypnosis with a natural comedic flair. 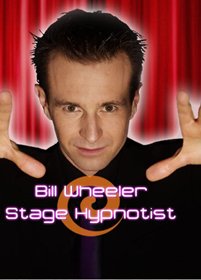 “I recently had the pleasure of having Bill Wheeler perform his Hypnosis Show for my daughter’s 21st birthday party. Everyone was enthralled by Bill’s talents, as he very quickly hypnotized my daughter and about 20 of her friends. I would not have believed it if I hadn’t seen it with my own eyes. They then proceeded to entertain the rest of the guests in a totally uninhibited fashion. Yes, a real hoot. The show was hilariously funny and topped off a fantastic day." Thanks Bill


"A quick letter of gratitude to you and your support crew for hosting an exceptional hypnosis show at our recent company conference at the Entrance, NSW. Results from a survey of our staff found that they considered the entertainment put on by you to be first rate. All of the staff had not laughed so hard in such a long time. As this was a company conference we appreciate the fact that you tailored your show to suit a professional environment. Once again thank you for making a part of our conference highly entertaining."

Just wanted to drop you a quick email to say thank you very much for entertaining us all on Sunday afternoon - a hard time of the day to get people motivated but you did a fantastic job - once again I havent laughed so hard since I saw you in Phuket! We've had fabulous feedback - with many of the agents wanting you to come back again next year!!! All the best in WA this weekend! Thanks again from the SA/NT State team Sandy, Megan & Lisa

Bill Wheeler travels from NSW
Fee Range: Up to $5000

Stage Hypnotist Bill Wheeler’s comedy hypnosis show, can only be described in one word, “Mesmerizing”. With his performance as a hypnotist being both dynamic and electrifying, Bill combines the mystic art of hypnosis with a natural comedic flair, to produce an innovative stage production for audiences of all ages.

After spending over a decade as one of Sydney’s premier club DJ’s, entertaining thousands of people nationally and internationally, Bill now dedicates his life to the entertaining and healing benefits of Hypnosis. It only seemed natural that with his entertainment background that he take his hypnotic skill to the stage, producing a high energy, high impact stage hypnosis show that will have your sides splitting with laughter.

His on-stage volunteers become the stars of the show, as Bill takes them deep down into a hypnotic trance, enabling them the opportunity to experience heightened creativity, increased relaxation and sharpened mental empowerment – all to the unending delight of audiences.

It is with his participants in this hypnotized state, that Bill builds his enormously entertaining performance, delighting participants and audience members alike together with his fast-paced wit in a superb, unforgettable one of a kind performance. Each participant that is on the stage, will react differently to the suggestions offered, so no two shows are ever alike! Because of this unique factor, Bill is able to personalize the performance to fit any event or corporate function. The performance is 45 – 60 minutes of pure enlightening fun!!