Print
As a public/corporate speaker - Brad takes you on a journey of his highs and lows, the people famous (and not so famous) that inspired him along the way, the struggles to stay focused and believe in the dream when he wasn't being picked to play year after year. 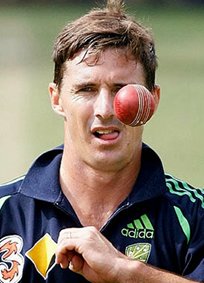 “ A huge thank you to Brad for his amazing speech on Saturday… He was honestly one of the best presenters I have ever seen – captivating, eve n for people like me who are just starting to get into cricket. My cheeks hurt from smiling so much!  And the take home of having to work really hard, not letting fear hold you back and never giving up, really struck a chord.  Everyone loved him!  We feel extremely privileged that he chose to support us.”

“Brad is awesome - very comfortable in the public eye, talking and meeting lots of people. He has so many cricket stories and knows how to tell a great yarn which had everyone glued to their seats.  He is very open about his experiences in his journey through life. He was also very accommodating with his speech, signing au tographs and mingling - and even had an impromptu game of indoor cricket, followed with a session of bowlin g!   The residents were thrilled.   Brad brought special memorabilia which guests were able to have photos with, and he even made phone videos to residents children. What a great guy - really happy with his visit!! .”

“Brad Hogg was a fantastic polished entertainer for our Conference.  He is a champion sportsman with a devilish humour streak in him. Had us all laughing from the very start.  Would certainly have him back again!!”

“We knew you had a lot to offer in terms of your experience with perseverance, determination and hard work, but was impressed with how you presented this to our group.  Your personal recollections were so earnest and honest . One story highlighted to me how good teams control and influence the behavior of members.  I think this is an important message in the context of all teams and organizations.  Good luck with the rest of your cricket days, and we welcome your success on the speaker circuit.”

“Brad was a fantastic after dinner speaker, really great!”

“Brad was truly fantastic on Saturday. He had the entire audience captivated to a point where you could hear a pin drop. He was energetic, vibrant, engagi ng and took us all on his journey with him. The addition of the props was fantastic too and really added to the experience. I told him it was one of the best speeches I’ve heard – but I don’t think he believed me!”

From his humble beginnings raised as an only child on a remote sheep farm in Williams, WA – this story is about a boy with a dream, the man who achieved it, lost it, then found the courage at an impossible age to stand amongst the worlds best again.

After a highly successful ODI cricketing career with three World Cup attempts and two World Cup trophies under his belt, Brad Hogg retired from playing any form of cricket in 2008.

In 2011, Hoggy shocked the nation when he made a triumphant return to professional cricket and became a major star of the inaugural T20 Big Bash League with his beloved state team, the Perth Scorchers. Packed WACA audiences chanted his name as the 41 year old took wicket after wicket with his unique left-arm chinaman bowling style, mixing it up with his googly’s and wrong-uns, much to the delight of the crowd.

Since then, he has been one of the most desired players on the world circuit and has performed in several international T20 League competitions including Bangladesh, South Africa, India, The Caribbean and Sri Lanka.

Packed audiences filled the Sydney Olympic Park Stadium and MCG as Hoggy made his 2012 appearance in the Australia VS India T20 series in March 2012, and again in Dubai for Australia VS Pakistan T20's in September, and finally, his squad pick to play in the Australian World Cup T20 team where they were eliminated in the Semi-Finals by the West Indies ... what a year!

His luck continued, when the Perth Scorchers won the rights to host the KFC T20 Big Bash League finals at the WACA three years in a row since the inaugural match, finally winning the Trophy in 2013/14 and backing it up with another win in 2014/15.   As a result, Hogg was once again called up for national duty and joined the Australian T20 team in South Africa for a few matches prior to the T20 World Cup in Bangladesh.  What a comeback!

His 2014 Perth Scorchers signup featured in a tongue-in-cheek parody of a music video, which went viral across the nation and featured on every states news/sports headlines. Unfortunately, the 'Three-peat' campaign of the Perth Scorchers to win three consecutive Titles was not to be, and Hoggy said farewell after five strong years with the Scorchers to allow the young fellas their day in the sun, and to chase once in a lifetime opportunities for a sixth BBL with The Melbourne Renegades in 2016/7.


Hogg continues to defy the odds, where, at 45+ years of age, he was picked up at auction by The Kolkata Knight Riders in the 2015 and 2016 Indian Premier League (IPL) and proved age is no barrier to his success.

As a public/corporate speaker - Brad takes you on a journey of his highs and lows, the people famous (and not so famous) that inspired him along the way, the struggles to stay focussed and believe in the dream when he wasn't being picked to play year after year, self belief in practice, facing fears, good leadership examples, teamwork, what the baggy green means to him and our country, how he deals with nerves, why preparation is critical to success, the hard work behind and between the scenes, change room pranks and anecdotal tour stories,  and much more ....

Brad is a natural performer, and his enthusiasm spills over onto the stage with an energy that is palpable, and an honesty that is endearing as he owns his mistakes and is humbled by his successes. Off field, Hoggy is a notorious prankster and on field, a smiling assassin – so there’s a carpet bag full of stories to share about the old days and the new.

A popular media personality, Hogg is a regular on radio across the country including Mix 94.5FM, 96FM, ABC, 6PR, MMM, EON Digital Radio, SEN Radio and many others. Between his game commitments, Brad loves to commentate and can often be heard and seen on STAR Sports, IPL, ABC and others.

Not. Done.Yet –  The kid from the bush with a dream of a Baggy Green, against the odds, the setbacks and comebacks (great for all ages)

Candidly Speaking – His Mental Health journey interwoven into a timeline of cricketing highlights and humour.