Print
Brad Manuel is one of the funniest and most creative entertainers you are likely to see, a world class comedian and magician rolled into one...  A double whammy of interactive verbal and visual comedy!  Brad’s shows feature his original “Mess With Your Head” magic, blended with a style of Interactive Comedy you have to see to believe. 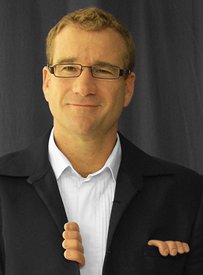 "As a combination of entertainer and motivator, Brad Manuel is exceptional. Brad has presented his talents to our group of financial advisers on a number of occasions in several different ways. His magic act is amazing and hilarious and his keynote address is absolutely inspiring. Brad has the natural instinct for connection with his audience, as well an extraordinary life experience that lifts listeners out of their seats. He is one of the best".

Brad was outstanding. He was very professional, friendly & chatted with guests all night. His performance was a huge hit with all the guests & had them all in stiches. He roamed around the room performing magic tricks for guests as they were arriving, then did his magic / comedy spot. He spoke with me after his act to ensure we were happy & then again roamed around the room performing tricks for the guests. We all could not be more happy with Brad & would not hesitate in booking him again for future events. He is a fantastic entertainer.

"I was absolutely delighted with our selection of Brad Manuel - His performance was nothing short of exceptional. It was both truly mystifying and hysterical. I glanced over at our Executive Management and they were laughing so much they were nearly crying"

Brad Manuel travels from QLD
Fee Range: Up to $5000

Brad Manuel is one of the funniest and most creative entertainers you are likely to see, a world class comedian and magician rolled into one...  A double whammy of interactive verbal and visual comedy!  Brad’s shows feature his original “Mess With Your Head” magic, blended with a style of Interactive Comedy you have to see to believe, which together deliver a truly unique experience that has been featured in over 15 countries (including a special “One Night Only” show in Las Vegas that was so successful it turned into 4 shows at The Luxor- Where in an encore he was challenged to perform in his underwear – He WON!!) He has been described in the industry as a “Comic Genius”

Brad is renowned for his “audience-involving” comedy and magic and is a much sought after performer in the Australian corporate sector as well as select international markets.  He has a very relaxed and casual persona which makes the “amazing stuff” he does even more amazing.  Things like pulling 4 cocktail glasses from his shoe... FULL!  He even gets the audience to drink them!  To borrowing a credit card for an EFTPOS transaction, blowing it up and having it reappear inside a brand new sealed jar of peanut butter.  Brad will also make one of your guests the star of his hilarious tribute to The Muppet Show all live on stage and much more!

The show is best described as “A Live Interactive Comedy Experience” that is guaranteed to have your audience in stitches...  Without fail!

Brad has several shows suited to different events from his Corporate Stand Up Show, to Comedy Club Shows which can be a little “Edgier” if you prefer, as well as MC & Event Hosting.

If you have ever wondered how magicians come up with their tricks...  It’s the rare innovative magicians like Brad create them, Brad is a very well respected name amongst international magicians as an inventor and original creator of many best selling magical effects and routines.  Magicians and Comedians worldwide currently perform routines created and written by Brad Manuel and the world's best magic suppliers carry the Brad Manuel Comedy Magic line of products and routines.

Brad also has the unique title of unofficial world record holder for dice stacking.  A truly amazing but rarely seen feat of skill to manipulate and stack dice inside an upturned cup, his current record stands at 25 dice.  Brad has performed and lectured his unique and amazing material in several countries and is a very versatile entertainer and host.

From mingling magic and general funny stuff pre dinner through to event hosting and his full Stand Up Show “Funny Tricks” Brad will have your guests talking about you and your event for a long time.

“Nothing Is Impossible - Unless YOU Make It Impossible”

THE IMPORTANCE OF WORKPLACE HEALTH AND SAFETY