Print
Brendan Montana is a professional magician and illusionist of the highest order, an international act for over 18 years. Brendan has appeared in almost every major venue in Australia and around the world. Specializing in routines with a... 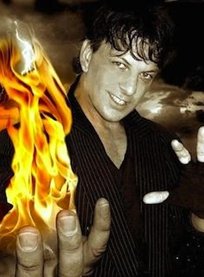 Brendan MonTanner travels from NSW
Fee Range: Up to $5000

Brendan Montana is a professional magician and illusionist of the highest order, an international act for over 18 years. Brendan has appeared in almost every major venue in Australia and around the world.
Specializing in routines with a difference, Brendan Montana has tailor made his entertainment to be comedic, fast paced, interactive and most of all spell binding for the audience.
Brendan Montana's Magic has a reputation in Entertainment Industry as one of the most exciting and dynamic entertainment shows in Australia. The production has worked extensively at all major venues across Australia and overseas and has amazed audiences in Hawaii, Guam, Singapore, New Zealand, Bangkok, Japan, South Korea and parts of the U.S.A.
Having a list of television credits to his name, Brendan has appeared on everything from Hey Hey It's Saturday right through to Midday Show. Brendan has weaved his magic for such impressive multi-national companies as Coca Cola, Pepsi, British Airways, Sony, Ever Ready, Microsoft, Canon, G.I.O. and many more, it highlights his professionalism and entertainment value.
Witness Brendan Montana appear, disappear, slice a person in to three parts, shrink a human body to six inches and vanish almost anything before your very eyes, plus more exciting, dangerous and spectacular feats. The Brendan Montana repertoire includes these amazing and spectacular magic effects and more. All or part is available depending on the scale and scope of the event.
One of the most important factors in creating really Special Events is to make sure that your guests start having fun right away, minutes after they arrive. You'll be delighted as you hear gasps of amazement and laughter as your guests are entertained at close range.
Brendan Montana's Roving Magic consists of three to five minute interactive magic presentations for individuals while they are seated or standing. Your guests will be delighted as cards, coins and other objects seem to come to life right before their very eyes. This enchanting fun and intimate form of roving entertainment is perfect for cocktail parties or as before dinner entertainment. It will leave the lasting impression you desire.
Subscribe
© 2022 Platinum Speakers