Print
Brian Goorjian is the most successful coach of Australian basketball, also bringing his coaching expertise and experience to the corporate arena, where he is regarded as a highly entertaining and passionate motivational speaker.In... 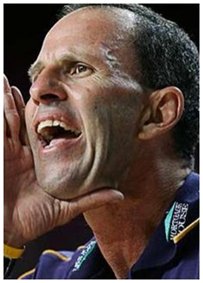 Brian Goorjian is the most successful coach of Australian basketball, also bringing his coaching expertise and experience to the corporate arena, where he is regarded as a highly entertaining and passionate motivational speaker.


In 2009, his first season as coach of South Dragons, he steered a remarkable Grand Final triumph, to take the team from the bottom of the ladder to the NBL Championship. Brian coached the Australian Men’s National Team, the Boomers, during two Olympic Games and one World Championship.
In recent years Brian has been Assistant Coach for the Chinese National Men’s Team and Specialist Advisor to the Dongguan Leopards, a Club team located in South China, close to Hong Kong.
American-born, Brian Goorjian played basketball at Pepperdine University in Malibu, California before coming to Australia in 1977 to play for the Melbourne Tigers under doyen coach, Lindsay Gaze. Since commencing his coaching career in 1988, Brian has coached more than 700 games winning more than 500 for a remarkable 70% winning average. He has won six NBL championship and six Coach of the Year awards, something no other coach has accomplished. Australian NBL Teams coached by Brian Goorijian have reached the semi finals, or better, for 20 consecutive years from 1988 to 2009. He was voted by his peers as the Greatest Coach in the Australian NBL’s first 25 seasons.
In 2001, Brian was appointed Head Coach of the Boomers, the first foreign born coach ever to hold this position. Under his stewardship, the Boomers achieved Commonwealth Games gold in 2006. He led the team to the Olympics in Athens 2004, where they were placed 9th, and on to the 2008 Beijing Olympics where they finished 7th.
Having completed his contract with the Australian National Team, Brian Goorijian was quickly approached by Team China to be an Assistant Coach for their Chinese National Men’s Team. His role was to provide expertise to the newly appointed young Chinese Head Coach. His brief was to ensure the Chinese National Team qualified for the World Championships to be played in Turkey in late 2010. This was achieved when China won a silver medal at the 2009 Asian Qualification Tournament.
Brian Goorijian moved on from the Chinese National Team to work as Specialist Advisor to the Dongguan Leopards, a club team located in South China close to Hong Kong. In this role, he developed the Club’s coaching personnel and worked with the Youth Squad.
As a speaker Brian Goorjian is considered one of the most entertaining and passionate of all the elite sports coaches.

Building a Winning Culture
Leadership and Teamwork
Goal Setting and Motivation
Surviving A Merger (In Brian’s Case, Two!!)
Developing Potential
Being The Best You Can Be
Subscribe
© 2022 Platinum Speakers