Delivering captivating and inspiring keynotes to corporates all around the world, Bruce Dickinson is  lead singer of Iron Maiden, an entrepreneur, commercial pilot and creative business thinker. 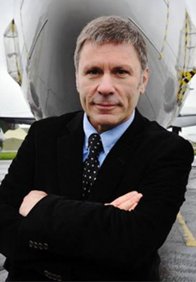 Bruce Dickinson is the lead singer of Iron Maiden, a commercial pilot, brewmaster, entrepreneur and creative business thinker. Bruce was a pilot and Marketing Director for Astraeus Airlines, a company which leased aircraft to other carriers. Bruce is also the man behind the company Cardiff Aviation which specialises in heavy maintenance of Airbus and Boeing commercial aircraft.

He is involved in an air ship venture to manufacture lighter than air hybrid transport aircraft, and is setting up a separate Training Company (Real World Aviation) to train future Pilots.

Dickinson left Iron Maiden in 1993 in order to pursue a solo career, his passion for fencing and an interest in becoming a pilot. He re-joined the band in 1999 and has gone on to release four albums; despite this he hasn't stopped flying Boeing 757s.

He conveys the thrill of creativity and has helped refresh this spark in teams and individuals across a range of businesses.

In his presentations, Bruce conveys messages on how to thrive in the ultimate change management environment: one day selling out 50,000 seater arenas, the next day negotiating complex leasing agreements with aircraft providers; The need to be agile and flexible in business planning with an ability to seize an unexpected opportunity and; the ups and downs of business and the sometimes hard lessons that have been learnt.