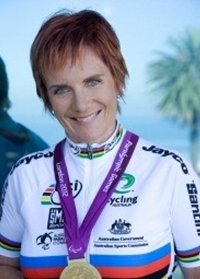 Carol is an inspiration to everyone she meets due to her kind, caring and “can do” approach to life.  She has overcome significant adversity with her battles with Multiple Sclerosis to become a rold model and now a Paralympic gold Medallist in cycling.  Carol is an exceptional presenter who engages the audience with touching stories about her life’s journey which make you laugh and cry.  I have no hesitation in recommending Carol to any organisation that is seeking an inspirational and motivational speaker.  I will definitely be using Carol’s services to inspire others.

Carol is a motivational and inspirational speaker that appeals to many different audiences. Her exceptional ability to connect with her audience and her thorough planning and preparation ensure that each speaking engagement or professional activity is of the highest quality.

Carol is a brilliant speaker who can capture the audience's attention and take them on an entertaining, meaningful and inspirational journey. Her messages are powerful and applicable to all of us and can be shared in any setting. I highly recommend her for you next event.

I had the pleasure of touring (insurance roadshow) with Carol for 2 weeks back in 2010. Travelling together with Carol I was able to see in person how she resonates with our clients (audience). Carol is a great motivational speaker who knows the importance of a well prepared speech. Working with Carol was a great pleasure for both, my company and our clients.

Carol Cooke travels from VIC
Fee Range: Up to $5000

After 35 years of training, 2 countries, 3 sports and one devastating diagnosis, Carol Cooke’s dream of winning a gold medal came true at 51. This is her story.

Carol was born and bred in Toronto, Canada where she fulfilled a life-long dream of following in the footsteps of her family and served as a member of the Toronto Police Force in Canada for fourteen years.  She had it all – an exciting and fulfilling career which also saw her working in the undercover drug squad.

But life was about to change dramatically, for better and worse. Carol fell in love with an Australian, married and moved half way around the world and settled in Melbourne.  After competing in Hobart at the Masters Swimming Nationals in 1998, she awoke one morning with disturbing balance problems and double vision.

After an array of tests she was bluntly told, “you have MS – go home and get your affairs in order before you become incapacitated”.  She was understandably devastated and the rest of the day was a blur.  Having only been married for three years and with no immediate family around, her thoughts revolved around how she was going to cope with this unpredictable disease. Fortunately, Carol found the determination and spirit to defy what the doctor had told her.

Carol was a national level swimmer in Canada while she was growing up and with an unstoppable nature and a passion for sport, Carol took up competitive rowing in December of 2006, made the Australian Rowing Team in 2008 and 2009 where she competed at the World Rowing Championships, coming away with a 6th place. She has held a scholarship at the Victorian Institute of Sport since 2007 and in 2011 took up the sport of para-cycling in the trike class.


May 27th 2015 marks MS World Day - and the day of the launch of Carol’s new book  ‘Cycle of  Life - A Gold Medal Paralympian’s Secrets to Success’.  After all, as Carol puts it so well  - just the day to celebrate that “She Lives with MS”

Although living with the never-ending symptoms of MS, Carol has the strength and courage to get up each day with a positive and motivated attitude.  She has learnt to live for today and not worry about what may or may not happen in the future.

Carol supports others living with MS to fullfil their dreams through her initiative, the 24 Hour Mega Swim. Since its inception in 2001, the event has raised over $7 million and has provided more than 700 Go for Gold Scholarships in the areas of employment, education, travel, the arts, sport and music.

Carol believes that “nothing is impossible if we dare to face our fears and believe in ourselves” and believes “the greatest pleasure in life is doing what people say you cannot do.”

She is aiming for double gold in Rio and will inspire you to follow your dreams.

•Goal Setting in Life and Sport