Chandran Nair is the Founder and CEO of what he believes is a “first”. The Global Institute For Tomorrow (GIFT) is an independent social venture think tank based in Asia. 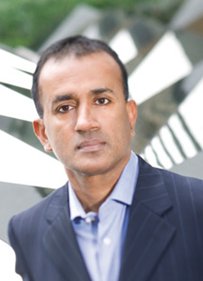 Chandran Nair is the Founder and CEO of what he believes is a “first”. The Global Institute For Tomorrow (GIFT) is an independent social venture think tank based in Asia.

Mr Nair was Chairman of ERM in the Asia Pacific until March 2004. He established the company as Asia’s leader in environmental consulting, developing it from one small office of 10 people in Hong Kong in 1991 to a strength of 500 in 12 countries when he left in 2004.Clients included many Fortune 500 companies, multilateral agencies such as the World Bank, the UNEP and the ADB, as well as governments. During his leadership the business in Asia remained consistently profitable, producing some of the best results within ERM’s international network.

For more than a decade, Mr Nair has strongly advocated a more sustainable approach to development in Asia, and has helped governments and corporations instil these principles into their key decision-making process.

He has worked and travelled extensively; corporations seek his advice on how to meet the challenges of doing business in Asia and of globalisation, on investment geo-politics, leadership development, ethics, sustainability, and corporate social responsibility.

He has addressed many of these issues at forums around the world, notably at speaking engagements in London, New York, Sydney, and all the major Asian capitals. He writes frequently and his articles have appeared in international publications including the Financial Times.

In addition to his work with GIFT Mr Nair has maintained his interest in business. For example, he is involved in providing strategic management advice and coaching to the European CEO of a global company with a focus on achieving growth targets and bringing about organisational change.

Mr Nair is a visiting scholar at the Hong Kong University of Science and Technology’s School of Business, running a course, “Leading in Asia for the Future”, as part of the HKUST MBA programme.

He has been an advisor to the Prince of Wales International Business Leaders Forum, the World Wildlife Fund in Asia, and to the Jane Goodall Institute. He is a fellow of the Hong Kong Institute of Directors. He is also a Fellow of the Royal Society of Arts. He sits on the Board of two companies.


A keen sportsman, Mr Nair managed the Hong Kong hockey team for seven years, taking it to the 2002 Asian Games in South Korea. He plays the saxophone and used to head a band in Africa. He has lived and worked in Asia, Europe and Africa.

•Doing business in a globalised Asia

•Business leadership in Asia for the future

•The West and the Rest: A new diologue