Chelsea Roffey is a speaker, author, researcher and Winston Churchill Fellow who has travelled the globe examining the barriers and opportunities of diversity. Pioneering the role of women in a non-traditional domain, her experiences have alerted her to the untapped potential in driving performance through diversity. 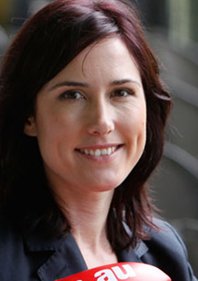 Just wanted to say a huge thank-you for your attendance at our Women's Network dinner last night. We have had nothing but positive comments today with everyone enjoying your talk and your focus! Quite inspiring for us and something we really needed.

Chelsea Roffey was an inspiring speaker and the conversation generated was fantastic.

We were absolutely stoked with Chelsea's presentation. She was able to cut to the chase, credibly speaking the language of her audience. She was also a breeze to work with, astoundingly generous with her time following the event, and utterly down to earth.

Chelsea was generous with both her story and her time, making a significant contribution to engagement with clubs and staff after the formalities of the event. The workshop generated many light bulb moments for attendees and was a great way to set expectations.

It was amazing to have you speak and share your thoughts and opinions with us. I had a friend come up to me after the evening to say that you were the best speaker we have ever had at one of these evenings, and I completely agree.

Chelsea Roffey is a speaker, author, researcher and Winston Churchill Fellow who has travelled the globe examining the barriers and opportunities of diversity. Pioneering the role of women in a non-traditional domain, her experiences have alerted her to the untapped potential in driving performance through diversity.

In 2012 Chelsea became the first woman to umpire an AFL Grand Final. But the true breakthrough was becoming the first umpire in history to be cheered (yes, cheered!) by the crowd ahead of that epic battle between Sydney and Hawthorn.

Other highlights include being enveloped by the post-anthem roar on Anzac Day, goosebumps at Adelaide Oval during the Port Adelaide cheer squad’s emotional rendition of INXS’s ‘Never Tear Us Apart’ and having my face connect with the end of a trademark Drew Petrie spoil in Tasmania.

Before Chelsea’s weekend hobby became a profession, she was an aspiring musician, having received an academic scholarship to study a Bachelor of Music at the Queensland Conservatorium. Following a stint studying biomedical science, she switched to journalism, combining a love of language and communication with the adrenaline-charged life of AFL football.

Chelsea has umpired over 250 games, 16 finals and sat the bench as the emergency umpire at five AFL Grand Finals.

She helps people to reframe the challenges of diversity and inclusion into opportunities driving competitive advantage.

“Ticking boxes” to achieve gender balance or diversity goals often reveals ingrained cultural issues which, if not addressed, are detrimental to diversity strategies. Chelsea’s work dismantles this mindset and encourages people to strategically embrace their personal influence, regardless of background.

Diversity doesn't need to be a game of winners and losers. Chelsea can help you create environments where individuals and teams thrive. She engages people who are ready to shake up the status quo, bringing curiosity and creativity to the way they lead and participate.

People who work with Chelsea build successful approaches to gender balance and diversity of thinking, because they go beyond the superficial level. They seek to find the place where nuance meets simplicity, by being:

Chelsea has explored themes of culture, equality and performance in a range of forums; including as an invited guest of the APEC Women's Leadership Forum in Beijing, the United Nations Commission on the Status of Women in New York, and during a Winston Churchill Fellowship, visiting the US, Canada, UK, Sweden and India.

Include, but not limited to:

How to attract and retain greater diversity

Game plan: how to win at diversity and inclusion

What it's like to own your story and sell your message