Print
Chloe Esposito OAM is one of Australia's most impressive athletes, having won Gold at the Rio Olympic Games in Modern Pentathlon, the most challenging sport of all.  Chloe is an extraordinary Australian sportswoman and an inspirational speaker and elegant role model. With her outgoing personality and charisma she will enhance any corporate occasion. 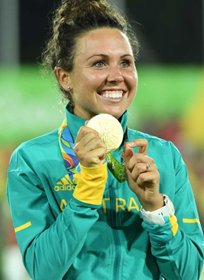 Chloe Esposito OAM is one of Australia's most impressive athletes, having won Gold at the Rio Olympic Games in Modern Pentathlon, the most challenging sport of all.

Her success was a long time in the making and a true demonstration of determination. She attempted to qualify for the 2008 Beijing Olympic Games at just 15 years of age, however a third place finish at the Oceania Championships in 2007 wasn't enough to qualify her... yet this didn't deter her from trying again.

Eleven years on, Chloe has competed at two Olympic Games and achieved an Olympic record in 2016.

Chloe is an extraordinary Australian sportswoman and an inspirational speaker and elegant role model. With her outgoing personality and charisma she will enhance any corporate occasion.

Following in the steps of father and now Coach, Daniel, Chloe first tasted podium success in 2011 at just 20 years old when she won the Swiss Open International. Since then she has been a top 10 regular and has established her position as one of the best Pentathletes on the world circuit.

In 2011 she returned to the Oceania Championships in Cheng Du, China seeking London Olympic qualification and achieved just that, qualifying 1st. Chloe went on to achieve Australia's best female result in London. She came from behind when she started the final combined event in 16th place. Her charge saw her finish in 7th and that gritty determination has become her trademark.

Although still under the radar of most Australians, 2012 was a pinnacle year for Chloe as she won her first World Cup medal in Rio De Janeiro as well as Australia's first medal at a World Championships. She claimed a bronze medal at the Junior World Championships in Poland.

Fast forward to 2016, having qualified for the Rio Olympic Games and overcome some prolonged injuries, Chloe Esposito was poised to take on the world. After three disciplines Chloe was seventh. She stormed through the field with precision shooting and superior cross country running to take home the crown as Olympic Champion and Australia's first medalist at an Olympic Game

Always pushing for more Chloe has set herself to two clear goals. They are to become World Champion and then to go on and represent Australia at the Tokyo 2020 Olympic Games. Back to back Olympic Gold Medals !

May 2018 saw Chloe make her aspirations clear. In Kecskemet, Hungary, she became the first Australian to ever win a World Cup event.

Always pushing for more, Chloe’s next goal is success at the Tokyo 2020 Olympic Games.

Chloe speaks passionately about her life story, the use of determination in achieving success and works to motivate her audience to achieve.

We are a product of our environment - the impact of family, school and local environment on achieving Olympic Gold.