Chris Ryan is a former journalist, mother of two teenagers and one of the most exciting new voices on the Australian comedy scene, winning Best Newcomer at the Sydney Comedy Festival in 2019.   Chris hosts regular comedy rooms and is a brilliant corporate master of ceremonies delivering professionalism, wit and humor. 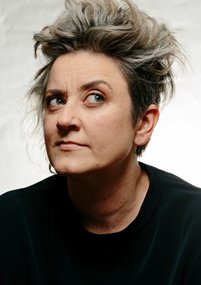 “She seems to be one of those rare comedians that are so good at what they do, and so comfortable doing it, that they make comedy seem easy. She commanded the attention of the room effortlessly; she evoked waves of laughter without so much as a sweat… Ryan has all the wisdom that comes with life experience with little of the (boring!) maturity, and it’s fantastic.”

“Chris was in total control from the moment she hit the stage, a comedian with a unique outlook and broad appeal.”

“Chris Ryan – was absolutely brilliant, working collective crowd touch points and making the fine line of discomfort and hilarity bleed into one with total mastery.”

“Unapologetic and ruthlessly clever, one of Canberra’s funniest people.”

Chris Ryan is a former journalist, mother of two teenagers and one of the most exciting new voices on the Australian comedy scene, winning Best Newcomer at the Sydney Comedy Festival in 2019.

Her laconic take on everything from romance to passive aggressive co-workers has earned her spots in Galas at the Sydney (2019) and Canberra Comedy Festivals (2013, 2017, slated for 2020), Floriade Nightfest and TEDx Canberra. In 2019, Chris performed comedy for the Australian troops in the Middle East and toured from Darwin to Tasmania, through regional New South Wales and Queensland with the Sydney Comedy Festival Showcase Tour.

Chris co-hosted the Qantas Australian Tourism Awards in 2020 and has been a panel guest in Girls’ Night In at the Canberra Writers Festival, sharing the stage with the likes of Jean Kittson and Jane Caro. After co-hosting a breakfast show on Canberra’s 2XXFM for two years, Chris is now a regular guest on ABC Radio Canberra and has appeared on ABC Radio National’s Drive Quiz and on Thank God It’s Friday with Richard Glover.