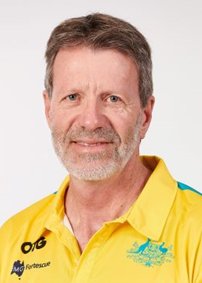 “Thanks again so much for today.  I’ve already received several emails from members saying how terrific and helpful your session was, so well done.”

“What a terrific presentation Colin. What a great choice – you articulated your insights and  experience in a way that allowed direct parallels and learnings for every business in your very professional and human approach to what you do so well. Congratulations. Nailed it!”

Colin Batch travels from WA
Fee Range: Up to $5000

From 2001 to 2008 he was the assistant coach of the Kookaburras during the most successful period in their history. During this era Australia broke their Olympic hoodoo winning the gold medal at the 2004 Athens Olympics as well as bronze at the 2008 Beijing Olympics, Silver at the 2002 and 2006 World Cups, Gold at the 2002 and 2006 Commonwealth Games and gold at the 2005 and 2008 Champions Trophies. The Kookaburras are Australia’s most successful Olympic team sport. The Kookaburras have won every Gold medal since hockey was included in the Commonwealth Games, a total of 7 Gold medals.

As a player, Colin held the record for the fastest hat-trick in Champions Trophy history from 1980 to 2009 with an 8-minute hat-trick against the Netherlands in a 7–3 win during the 1980 tournament. The record was beaten in 2009 when Nam Hyun-Woo scored a 7-minute hat-trick to secure Korea a 4–3 win over Spain.

Coaching an elite sports team has many parallels that leaders can take away and implement with their teams. Throughout his Olympic career as both a player and coach, Colin has developed great insight into the importance of people, culture, motivation and the importance of planning.

Colin is able to share his Olympic Silver medal-winning journey and leadership insights in the field of elite sport.

My journey in High Performance Sport

Excelling in times of adversity and uncertainty

Looking at what is in your control and what is not

Focus on the outcome and process to get there

What to change for future success?

How support staff can drive excellence