Print
Mark Donaldson’s extraordinary achievement for the most conspicuous acts of gallantry earned him the Victoria Cross. Mark’s selfless actions during ‘an incident’ took place in a circumstance of great peril in Afghanistan as part of the Special Operations Task Group. 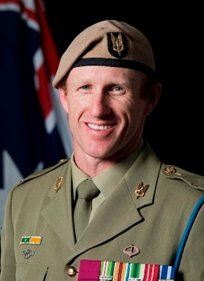 Mark Donaldson gave a humbling address at our BOSS Emerging Leaders event on the 21 May 2014. Mark drew the largest crowd our events have seen in 3 years showing the great resonance that his personality and story has with Australians. Mark shared his incredible story from his turbulent early years to the harsh realities he faced during combat in Afghanistan, highlighting some key learnings and influences that he has taken away from his training. Mark gave a compelling, humble and emotionally driven speech that captivated our audience. Mark and his manager were a pleasure to work with and always acted with the utmost professionalism.

Mark was an excellent keynote speaker who got a standing ovation.  The feedback we received was that everyone appreciated his speaking and video footage – very raw.

Very humble man, very enthralling to watch. Powerful story that reminds us all that we should always think of others and take a chance.

Mark Donaldson VC is a remarkable young man that has lived life to the full from a very early age.

On 2 September 2008 in a valley in eastern Afghanistan, Trooper Mark Donaldson made a split second decision that would change his life. His display of extraordinary courage that day saw him awarded the Australian Victoria Cross for Gallantry - the ultimate symbol of heroism.

Yet Mark’s journey to those crucial moments in Afghanistan was almost as exceptional as the acts that led to his VC.

He was a rebellious teenager who lost his Vietnam veteran father in mid teens and a few years later his mother disappeared, presumed murdered.

A young man was at the crossroads. He had a choice, a life of self-destructiveness and petty crime or change the pattern. Mark chose the Army. It turned out to be a wonderful alternative and truly inspiring for the youth of Australia.

Mark Donaldson was a natural soldier who excelled in the training and discipline of Army life. He set himself goals and planned a program that would see him pass the most rigorous of mental and physical tests to become a member of Australia’s elite Special Air Service (SAS). He took no short cuts.

Tours of East Timor, Iraq and Afghanistan followed and Mark carries the reminder of how luck can be an important ingredient in success. A bullet remains lodged in his leg to this day to keep him focussed.

Mark Donaldson VC knows what it takes to lead. He knows what it is like to take responsibility for personal and team success. He knows how crucial effective communication is to the success of any plan.  Mark knows what makes an effective team.  He knows how critical it is for leaders to be agile in their decision making and how important resilience is in both the planning and implementation phases of an operation. In his world, lives depend on it.

Mark Donaldson VC is married with two children. He continues to serve in the SAS. He has authored a best selling book  “ The Cross Road - a story of life, death and the SAS” and he is  committed assisting soldiers to settle back into Australian life after being in harms way on duty overseas.

The Cross Road - a story of life, death and the SAS