Craig has written two books on his experiences on recovery from serious mental illness , anxiety and depression. In 2004 Random House published his best selling first book Broken Open which to date has sold over 35,000 copies. In 2012 Allen and Unwin published his second book A Better Life which provides a great insight into the road to recovery and ongoing improved mental health and wellbeing. 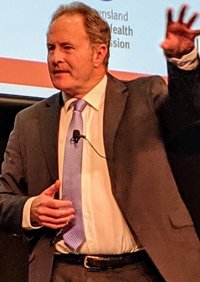 “Craig spoke as the after dinner speaker at our recent National Sales Conference. His honesty, humour and insights into living and coping with mental health had the room in complete attentive silence. His ability to share his own personal journey and explain the impact on his family, friends and colleagues enlightened the room to the devastating effect of mental illness. Craig's open approach was full of great stories drawn from his experiences in sport and broadcasting, and his work as an advocate in the area of mental health. His advice was practical, non-judgemental and led to a lively 'question and answer' session and overwhelmingly positive feedback from the entire team.”

“Craig Hamilton was the keynote speaker for a UGL-sponsored 'TrackSafe R U Ok day', aimed at raising awareness of mental illness and supporting suicide prevention. The audience for the event was made up of the UGL Broadmeadow operational team, as well as our Hunter Valley Maintenance Centre workforce partners and right from his opening address, through to his final summation of the event, Craig had them captivated. His open, 'blokey' style, helped him identify with and relate to those gathered, especially as his frank and honest commentary took them on the peaks and troughs of his own journey. The team hung on his every word and in my own time at UGL, I don?'t think I have ever seen them so quiet! I would happily recommend Craig to anyone hosting a similar event or corporate function. He is as an excellent keynote speaker and an all-round good guy.”

“I thought Craig was a brilliant speaker - just to hear his story told in such an honest way really hits home doesn't it.”

“When Craig starts telling his story, you don't want him to stop. It is honest, insightful and spoken with great passion and conviction.

Craig spoke to a room full of journalism and public relation academics, local media and staff working in mental health.

His presentation had something in it for everyone. He was able to reflect on his personal experience with mental illness, his role in the media and his experience writing his first and second book. Our national guests were talking about his insights long after that evening and reflecting on both their personal and professional roles.

Craig Hamilton travels from NSW
Fee Range: Up to $5000

Craig started his career as a broadcaster with ABC Radio in 1994. Since then he has covered Rugby League, Rugby Union and cricket at international level as a commentator.

Craig is probably best known as a member of the "Grandstand" Rugby League commentary and has worked on the past 17 Grand Finals, State of Origin series and a number of Test Matches.

Craig was born and raised in the Hunter Valley town of Singleton and spent 16 years working as an underground coalminer in the Newcastle area before embarking on a radio career fulltime in 1999. In 1991 Craig represented the Newcastle and NSW Country cricket teams, and played against the touring Sri Lankan team.

In the year 2000, on the eve of the Sydney Olympic Games where he had been assigned to work as a broadcaster, Craig experienced a psychotic episode and was diagnosed with Bipolar Disorder. Craig spent 12 days in hospital and once he recovered, set out to create awareness of mental health and also break down the stigma that surrounds those that suffer from mental health issues.

He has since become one of Australia's most high profile and most sought-after speakers on mental health awareness, lifestyle, overcoming adversity and work/life balance.

Craig has written two books on his experiences on recovery from serious mental illness , anxiety and depression. In 2004 Random House published his best selling first book Broken Open which to date has sold over 35,000 copies.

In 2012 Allen and Unwin published his second book A Better Life which provides a great insight into the road to recovery and ongoing improved mental health and wellbeing. It has become a best seller.

In sharing his story and experiences he offers hope to others.