Print
Danyal Diallo is only 17 years old and is a strong fighter against excuses and an even stronger advocate for social change.  Danyal’s presentations are ideally suited for those who want to create change in their lives sharing his insight in philosophy, ethics, mindset, and leadership by leading by example. 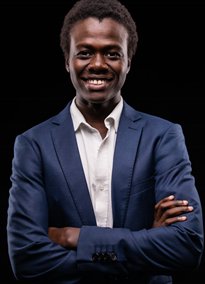 “I have known Danyal for almost 12 months and he is a young bright leader. I saw him at TEDx youth talk and he is a natural speaker and motivator .I have engaged with him and seen him over the last 12 months working on different projects and this guy is a hustler and a go getter. Good on you Danyal on what you do and I can see a bright future for you :) Good Luck”

“Danyal is a confident speaker who has a natural talent for storytelling. His strength lies in his ability to draw on his experiences as a child immigrant and how he was able to overcome life hurdles to help other students reach their dreams”

"I first heard Danyal at the TEDxCasey event in 2019 and wow, what an engaging and charismatic speaker he is! He is fun yet serious about his message, he is gentle yet strong around his purpose and he is a storyteller yet authentically connected. Who you see when you hear him speak is how you experience Danyal as a person in any day-to-day interaction. I would highly recommend engaging Danyal as a speaker if you're looking for deep reflection and true connection - his message is powerful!"

“Danyal has a strong passion to build others up and help them become the best version of themselves that they can be. This, along with his genuine care and desire to help, was highly evident upon my first meeting with him. He was able to create a space in which I felt comfortable and well listened to. I left our meeting with sense of calm and purpose, and felt more energetic overall as his enthusiasm and zest are infectious”

Danyal Diallo travels from VIC
Fee Range: Up to $5000

Danyal Diallo is only 18 years old and is a strong fighter against excuses and an even stronger advocate for social change.

Coming to Australia Danyal found it hard to get along, he always felt this sense of displacement- living in a new country. He discovered however the concept of ‘'home' is subjective”. Born in Sudan, Danyal sustained a hip injury when he was three after being pushed off a building. Every step he takes hurts.  He uses that pain to remind him what he wants in life, which is certainly not to work for someone else.

For Danyal the things that normally hold people back – race, youth, disability- spur him on. He teaches others that success is a choice and it’s always on the table. It’s up to you to grab it. This is highlighted in his TEDx presentation “Breaking the Stereotypes”.

Danyal is a youth leader still studying while working with his local Casey Council. As a social entrepreneur he is also assisting Destiny Rescue Australia to help get kids out of sex slavery in Eastern Asia. He believes that 'There is nothing greater than the chance to have a chance at something'.

Danyal’s presentations are ideally suited for those who want to create change in their lives sharing his insight in philosophy, ethics, mindset, and leadership by leading by example.

A true inspiration at such a young age Danyal Diallo is not going to let anything get in the way of what he wants to achieve.