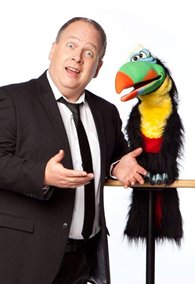 He was by far the funniest, most entertaining comedian/entertainer that we have had for our awards program. We have received the best feedback from attendees on the night and hopefully we can get him back next year.

Fantastic, everyone laughed until they were in tears. All our staff were saying how great he was, another department of NRMA is going to book Darren for one of their staff functions.

Darren Carr is one of the funniest people I’ve ever seen. Are you sure we don’t owe you extra for the great fun he provided.

Darren Carr proved an excellent MC for our function. His comedy material was very well received and the idea of using his alter ego dummy as part of a double act to MC the Awards presentation gave it a light-hearted touch while still keeping everything on track.

I have worked with a lot of talent over the years and Darren is, by far, the best I have seen.

Darren scored an average of 8.30 (out of 10) in our recent survey.  He was extremely funny with some people saying that he was the best comedian they have every seen.  I know I laughed so much my cheeks hurt.

Darren Carr travels from QLD
Fee Range: Up to $5000

Recognised throughout the industry as Australia’s number one ventriloquist, Darren Carr delivers professional and entertaining performances with his cast of hilarious characters at numerous corporate functions, special events, clubs and theatres worldwide.

It was at the ripe old age of eight years old that Darren started playing with dolls and talking to himself. Luckily for him, coming from a show business background meant that this was considered normal and actively encouraged by his parents.

Darren has performed with great acclaim to audiences from all over the world and has twice accepted invitations to appear as a headliner at the International Ventriloquist Conventions in the USA.

As an MC with a difference or a guest entertainer, Darren Carr works with his range of characters, tailoring and personalizing his show to make it relevant to your company, ensuring a unique and laugh filled event. As a special treat, you can even have one of your colleagues transformed into a life-sized ventriloquist dummy and watch them perform as you never thought they could!

With this special blend of ventriloquism, comedy and music, Darren Carr and his cast of hilarious characters will deliver a professional and thoroughly entertaining show for all who love to laugh.