Print
Darren Flanagan was nicknamed 'The Gun' by Todd Russell and Brant Webb because he was the one who charged and fired the explosives that eventually released them from the infamous Beaconsfield mine disaster. Darren’s first - hand account is gripping, emotional and detailed and one in which describes Australia's most dramatic mine rescues captivating and inspiring corporate audiences throughout Australia and internationally. 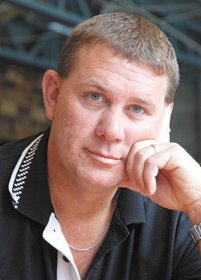 Darren's story is amazing - everyone in the room felt like they were there. Darren made our audience laugh, cry, but most of all realise how amazing we all can be. His story is truly memorable.

To say it was an interesting, absorbing and dramatic presentation would not be doing it justice. His talk was electrifying, emotional and detailed...His description of the rescue operation and conditions the miners survived in, made us all understand, not only the enormity of the operation and the delicacy of the final preparations… the extreme conditions that rescuers and rescued were sharing but how the Aussie spirit shone through.

In a nutshell, he blew everyone away. Several of our guys who have been with us for 10 years or more said he was the best speaker we have ever had. It was nice to have someone who wasn’t overly professional (that’s not a criticism) and didn’t look like he was ‘just going through the motions’. He is an ordinary, genuine man who was caught up in an extraordinary set of circumstances….everyone in the room was moved by his experience … a lot of our delegates are men in the construction industry - they’re not known for being easily affected.

Darren was well received from our audience. We sent out a survey and Darren received either a good or excellent. Darren has a very real story to tell which certainly feels like you are living through the moments he felt, which is not only heart breaking but inspirations. The opening video sets the scene as everyone will remember the Beaconsfield Mine disaster.

Outstanding, memorable tale....Thank you! What an inspiration and it shows what we can face when adversity strikes.

Darren Flanagan was nicknamed 'The Gun' by Todd Russell and Brant Webb because he was the one who charged and fired the explosives that eventually released them from the infamous Beaconsfield mine disaster. Darren’s first - hand account is gripping, emotional and detailed and one in which describes Australia's most dramatic mine rescues captivating and inspiring corporate audiences throughout Australia and internationally.

Darren spent a full week underground after his arrival, test blasting at the 630m level to simulate what he hoped he would never have to do. As this had never been done before anywhere in the world, he presented the results to the mine management who asked Darren to eventually blast to within 300mm of Todd and Brant. Darren started to blast his way closer and closer to the trapped men using specialist explosives that were designed to help reduce impact on expensive infrastructure but were never designed to be used near human beings.

Darren Flanagan has spent a lot of time underground but had never had to work in a cracked and broken tunnel 16m long and only 1m in diameter and almost 1km inside the earth. He is so claustrophobic he can't do up a sleeping bag but he worked for 29 hours straight with ice cold water soaking him to the bone, afraid of closing his eyes. "When you are underground you can usually hear the ground talking to you, moaning and groaning. When it stops talking, you worry. The ground had now stopped talking." Firing that very first shot was the hardest thing Darren will ever do in his life.

Darren Flanagan crawled over razor-sharp rocks letting off 65 explosions, all the time in contact with Todd and Brant by phone. They counted down together: three, two, one, fire, so the miners could brace themselves for the effects of the explosions. Thinking it over, Darren stumbled off to sit and cry with relief that he hadn't killed them. Speaking to Todd and Brant over the phone, they were aware of the increased risks but encouraged Darren to carry on: it was their only chance. "Please don't leave us here mate, you must promise me that you will stay until it's finished"... Todd's words still ring in Darren's head.

Wrestling with his own demons, Darren slowly crawled back up the tunnel, dragging himself by his arms because his knees were so badly cut and swollen. The tension in the air as Darren prepared for the final shots was unbelievable. Amazingly he brought the rescuers to within less than 30cm of Todd and Brant.

Darren Flanagan has received hundreds of letters from all over the world recognizing him as the man who blasted the miners to freedom; some people have called him the new Red Adair. But his most treasured letter is from Todd that says "thanks for saving my life." Darren Flanagan is a humble and reluctant 'celebrity' who has appeared on Sunrise at Seven, The Today Show, A Current Affair and Sixty Minutes, to name a few. But for audiences who hear him speak he is an ordinary guy who shows what can be done when called upon and the potential to be extraordinary.