Print
Recently retired from coaching duties with the Australian team in March 2018 Darren is available for keynote presentations around the topics of teamwork, leadership and stories from the field and locker room. 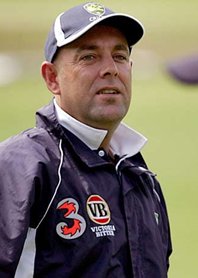 We were impressed with the research Darren did prior to his keynote speech last week. The mining sector and more particularly its relevance to Roxby Downs and surrounding community is what makes BHP Billiton the company it is today. Hearing first-hand what drove Darren to success and his team mates and the sacrifices they made to reach the top, made for good honest chat amongst the group. We have always enjoyed having Boof along for our corporate golf days and cricket days, and now that same enthusiasm and understanding has been shown to our team leaders in the board room.

Darren was exactly what we expected and more. His ability to work the room and make everyone feel important – a skill very few possess, was top shelf. He recounted some great cricket anecdotes and stories but made relevant to our key management. Sport and business have many parallels and Darren was able to move between the two effortlessly. We look forward to seeing him again.

We have used Boof as a Brand Ambassador for Lion Nathan, and more importantly with XXXX Gold for the last 5 years. He has helped us become the second most consumed beer label in the country. He works the suits as effortlessly as he work the singlets, and it’s this approachable and ‘realness’ manner that makes him the popular figure he is today. I’m sure there are many more years of enjoyment to be had with Boof and the XXXX Gold brand.

Two weeks prior to the 2013 Ashes Test Series Darren Lehmann was appointed head coach for the Australian cricket team bringing the same attitude to the Australian coaching role as he did his own cricket, to play hard, respect the game and your opponents, but most importantly enjoy the contest.

There are very few recently retired players who have been lauded for his knowledge and appetite for the game of cricket as Darren has and he has continued to make his mark in cricket not only in Australia but around the world.

From the time that he burst on to the first-class scene in Australia as a 17-year-old in the 1987-88 season, making his Test debut in Bangalore in 1998, Darren built an imposing record not only in Australia but around the world.

Darren Lehmann's talents won him regular opportunities in Australia's one-day international team, particularly during the late 1990s, and on the restructuring of the country's limited-overs squad in early 2002. In 1999 he had the honour of hitting the winning runs in the World Cup final at Lord's, and was a key member of the side that defended the title four years later.

On the domestic front he was no less effective, and was an integral member of winning Sheffield Shield sides in 1990-91 and 1995-96 and Yorkshire's victorious County Championship team of 2001. He became the leading run scorer in Sheffield Shield/Pura Cup history. The peak came during a career-best 301 against Western Australia at the Adelaide Oval, an innings that ended with 116 from 87 balls in the second session. Only a late stutter prevented him from challenging Michael Bevan's record for most runs in a season.

During his stellar career Darren Lehmann played in 117 One Day Internationals for Australia, including 19 World Cup appearances, finishing his career with a huge Test Match batting average of 44.9 and a One Day average of 38.96. He was named the Wisden Cricketer of the Year in 2001 and 2004-05.

Darren has also been busy with his numerous roles with Lion Nathan as a XXXX Gold Ambassador, as an Ambassador for the Fielders Group and, of course, with the Darren Lehmann Cricket Academy. In 2016 he released his auto biography ‘Coach.’

Recently retired from coaching duties with the Australian team in March 2018 Darren is available for keynote presentations around the topics of teamwork, leadership and stories from the field and locker room.

“Coach’ – An insight into how a world-class sporting team ticks