Darryl Lovegrove inspires his audience sharing his tale of success.  As a speaker Darryl focuses on areas of leadership, innovation, resilience, passion and focus. As an entertainer he will showcase his extraordinary flare. 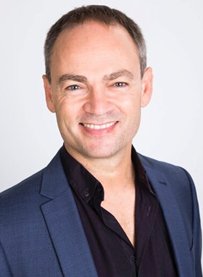 His presentation was nothing short of extraordinary. He’s engaging, funny, insightful, entertaining and of course highly inspirational. So what would I say to someone thinking about hiring Darryl Lovegrove? Just do it.

Darryl is WORLD CLASS!  Everybody is raving that it’s the best Export Awards ever

Darryl is outstanding and versatile.  His presentation is full of pertinent points that relate to life in general as well as business. He is a dynamic entertainer and the conclusion of his presentation is the only one I have ever attended where everyone ends up on their feet and there is a spontaneous standing applause  - fabulous way to end a conference. Darryl also performed at our gala dinner and was fabulous.  Undoubtedly one of the best performers we have engaged.

Darryl was incredibly entertaining with the whole team unequivocally positive about his key note.  He was fun, passionate and warm – with a great business message to share that was really relevant to us.  Everyone got something out of it. Simply brilliant!

Darryl delivered a motivational presentation with a highly compelling message and was a resounding success with our clients. I can state unequivocally that he has been one of the best speakers we’ve had. I want to extend my thanks on the outstanding keynote he presented at our Annual Convention.

Darryl Lovegrove is a keynote speaker, entertainer and award-winning performer; an entrepreneur with an extraordinary global business success story of ‘operatic proportions’ bringing value to conferences and events through his inspiring tale of Passion, Perseverance…and Puccini.

Darryl’s the co-creator of the world renowned ‘The Three Waiters’ who have thrilled millions worldwide, won multiple awards and is regarded as the most successful act in the history of the events industry. Since creating his own company, he has gone on to produce some of the most successful acts in Australasia.

A multi-award winning performer, Darryl’s reputation is well established in the contrasting worlds of musical theatre, opera and rock. Winning the Australian singing competition in 1989, Darryl honed his musical skills as a member of the original Australian casts of Les Miserables and Chess, before his award-winning portrayal of Jesus in the Australian and New Zealand tours of Jesus Christ Superstar for which he won New Zealand’s Entertainer of the Year ‘Rising Star’ award and an Australian ‘MO Award’ nomination.

Career highlights include the Australasian tour of The Music of Andrew Lloyd Webber where he featured with Sarah Brightman and Anthony Warlow and starring roles in The World Goes Round, An Unfinished Song, David William’s Sanctuary and many others. He received critical acclaim when he both produced and starred as John Lennon in the national New Zealand tour of Looking Through a Glass Onion – an evening with John Lennon in words and music. Darryl toured Australia and NZ with Glenn Shorrock performing the music of Lennon & McCartney in Let it Be and with original members of ‘Split Enz’ and the New Zealand Symphony Orchestra in ‘ENZO’.

In 1999 he co-created the operatic phenomenon ‘The Three Waiters’ and was instrumental in establishing offices in Sydney, Los Angeles, New York, London and Bogota Colombia. Winning 3 consecutive American entertainment awards ‘The Three Waiters’ became the most-booked corporate entertainment act in the world. In 2009 Darryl sold his financial interest in ‘The Three Waiters’ and established his own company ‘Lovegrove Entertainment’ which has continued to create award-winning acts for the events market. In 2012 his corporate act ‘Darryl & Harmony’ (with his 12 year old daughter) was voted ‘Entertainer of the Year’ at the Australian Event Awards. He also created event favourites ‘The Leading Men’ (a two-time Australian Event Award finalist) and ‘Jersey to Motown’.


Continually voted as #1 speaker at conferences around Australia, Darryl’s keynote combines his inspirational story and entertaining ‘night at the opera’ performance with key take home messages, in a way that leaves audiences spellbound and wanting more.

Save yourself the time, money and frustration of looking for a keynote speaker, entertainer and MC for your event. Darryl is a dynamic presenter who can deliver all three, while captivating and engaging your audience.

His story of how he and a mate took the operatic phenomenon ‘The Three Waiters’ to the world and made it #1 continues to captivate audiences from many industries and fields around the globe. It is one of triumph over adversity; of a proactive and innovative duo who took the events industry world by storm by creating a show now seen over 11,000 times in over 80 countries. Darryl cuts through corporate jargon to recount his amazing story, of a guy who ‘never took no for an answer’ and provides an honest look at the challenges of launching a business idea that turned into a global phenomenon. A hit with audiences across many industries and fields, Darryl talks passionately and engagingly on the subjects of:

Having established his own company in 2009 he is able to pass on how he was able to survive the savage repercussions of the GFC and go on to create his own award winning array of acts that are now among the most booked in the Asia Pacific region. His first hand account of being able to ‘walk the talk’ has established him as one of Australia’s business resilience experts and in 2014 he was invited to speak at the ‘Million Dollar Round Table’ in Toronto, which is arguably the most prestigious conference in the world.