Print
Daryl Elliott Green’s life was shattered in 2000 when he was TWICE SHOT and catastrophically injured. Today he draws on stories and anecdotes from his often harrowing experiences – from incident to recovery – to bullet proof teams and leaders and to show them that the qualities of bravery, courage and resilience lie within us all. 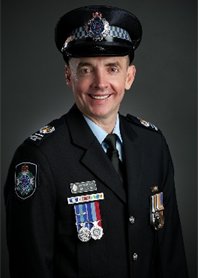 “Our leadership team’s workshop with Daryl was very powerful and delivered a number of key messages that have truly resonated with all that were there. Daryl’s personal insights into what has been an incredibly challenging period of his life has opened up a range of conversations and created an opportunity for people to reflect on the importance of people and teams.”... “I recommend Daryl’s workshop unreservedly – a true investment of time which exceeded my expectations.”

“I had the pleasure of witnessing Daryl’s presentation in 2015. It was easily one of the best I’ve seen – moving, informative and very entertaining. The first thing that struck me was the courage required to re-live that horrific event in order to try and help others who had suffered similarly. Then there was the mental strength needed to go from a depressed state to standing up in front of an audience and not only telling a demanding story, but doing it in such an entertaining and informative way. Daryl deserves our thanks and our congratulations on what he’s doing for the community.

If you have an opportunity to see his presentation live don’t miss it.”

“The response to your resilience presentation has been overwhelming, so much so we have had you return three times over the past nine months. Feedback from each of the sessions has been exceptional, including: ‘I felt humbled and privileged to have had the opportunity to hear Daryl speak. It was a powerful and moving three hour presentation from a truly courageous and resilient man, interspersed with good humour and audience interaction. I hope Daryl never tires of imparting his experiences and learnings. I came away with a great perspective on how sweating the small stuff is truly such a waste of time.’.”

Daryl Elliott Green travels from QLD
Fee Range: Up to $5000

TWICE SHOT in the line of duty, an incredible story of bravery, courage, and resilience

In the early hours of 1 May 2000, Constable Daryl Elliott Green was on a routine job when he was ambushed and TWICE SHOT in the face and shoulder. In the heat of the moment, despite his critical injuries, Daryl instinctively grabbed his firearm and began searching for the gunman. For his actions that night, he received the highest police award for bravery and a citation from the Governor General. He was also featured on an episode of Australian Story.

Daryl’s real story however – one so harrowing it will keep your audience on the edge of their seats – was only just beginning. What happened to Daryl and how he clawed his way back from the depths of despair is truly inspiring.

Daryl’s journey will captivate you. With an intuitive gift for public speaking, Daryl delivers powerful life lessons with energy, humour, and optimism. He is a compelling and authentic speaker, and his down-to-earth style connects with people from all walks of life. He epitomises the capabilities of the human spirit that reside in us all: bravery, courage, resilience.

TWICE SHOT talks can be customised to suit your audience. They also include actual audio of the shooting, 3D computer modelling, 2D schematics of the incident, crime scene photos, and the offender’s profile.

Watch Daryl as he re-enacts the night he was shot and be transfixed as recounts his journey of recovery, his multiple surgeries, his psychological battles, his return to policing, and amazingly how he overcame his fear of guns by becoming a firearms instructor and much more. Hear how he turned his life around.

In 2018, Daryl was honoured as a Lifeline Ambassador. He’s also received accolades from Professional Speakers Australia for his powerful keynote speaking.

Daryl’s inspiring story of sheer grit, drive and resilience is one your audience will not forget.

Ask for and accept help

Accept and adjust to change

Capitalise on the advantages change brings

Courageous conversations - say the right thing and follow up

Prepare for a difficult conversation

Know why, how and when to step up and start a difficult conversation

Discern the most important thing after a difficult conversation

Leadership - lead others through a firestorm

Navigate people through and out of difficult times

Motivate people for maximum achievement during and after challenging events

Stay on course and sleep easy at night